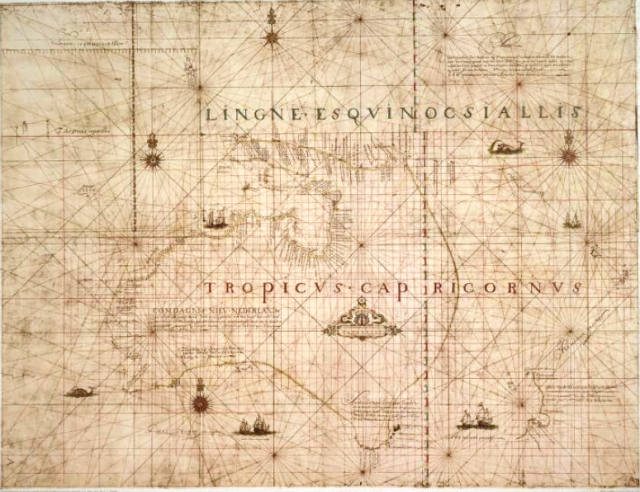 Having grown up in Sydney, I can remember as a student visiting the Mitchell Library in the 1950s. My memories are of a large and impressive reading room but I must confess that I paid little attention as to how I arrived in the reading room after passing through the front entrance. 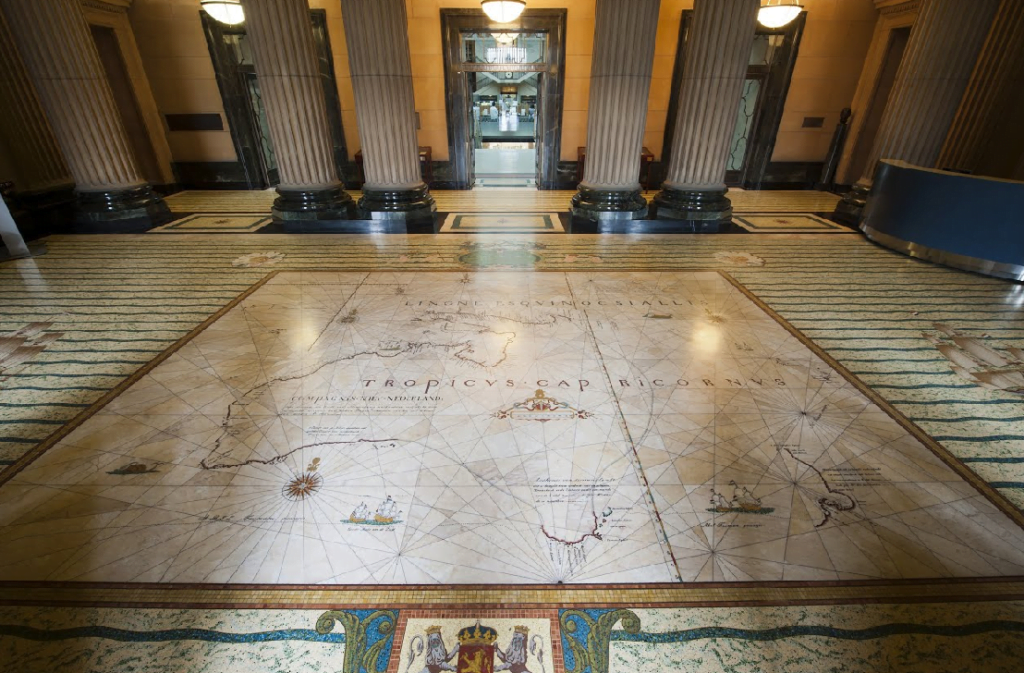 I now realise that to do so, I had to traverse one of the most remarkable sights in Australia: a mosaic of the Bonaparte Tasman map in the vestibule:

This map graphically illustrates the voyages of Abel Tasman and how his voyages of discovery produced the first recognisable image of the Australian continent. What is of particular interest to me, given my interest in Indonesia since my student days, is that this pictorial record Tasman’s voyages south from the Dutch East Indies demonstrates how interlinked are the early histories of Europe’s voyages of discovery to Indonesia and Australia.

Ian Burnet in this stunning volume brings alive the many voyages of discovery that linked the exploration and Dutch conquest of Indonesia to a growing awareness on the part of the Dutch of the great, but as yet unknown, land to the south. Burnet, chapter by chapter with stunning illustrations and reproductions of early maps, has managed to document the many voyages from Europe to the “far east” by way of both the Cape of Good Hope and Cape Horn that managed to create in Europe a global awareness of the world. It is a tale of the rise of English and Dutch mercantile capitalism, and the subsequent decline of the Portuguese and Spanish feudal empires, the many ways that the “east” and the “west” interacted, the fortunes that were made, the horrors that many ordinary people experienced, and the way the foundations of the modern world were laid in our part of the globe.

Most of us will have heard of parts of Burnet’s story, whether it is of figures such as Francis Drake, Dirk Hartog or Abel Tasman, or of place names which reflect historical moments in our history, such as the Gulf of Carpentaria, Arnhem Land, Groote Eylandt, Rottnest Island, or Maatsuyker Island. But other parts of his story will be new to many. There is the tale of how the tiny spice island of Rhun, lying to our north and claimed by the English was subsequently “swapped” for Manhattan Island that had been claimed by the Dutch. There is the horror story of the wreck of the Batavia on the Western Australian coast where a mutiny among the survivors led to a massacre and an eventual bringing to horrific justice of the perpetrators. The many voyages in our part of the world, such as that of the Duyfken, a replica of which recently sailed around Australia, are brought to life through Burnet’s judicious use of contemporary chronicles, logbooks, paintings and maps.

The book also reminds us that Abel Tasman was the first European to circumnavigate Australia despite the fact that for much of his travels he was not in sight of land. However, his two great voyages managed to piece together the disparate understanding of the relationship of our continent to the islands to our north that had slowly arisen through previous voyages, many of which are documented by Burnet.

The book contains many surprises. There is the 1647 verbatim detailed description of the appearance and life cycle of wallabies written by the first Europeans to encounter such, to European eyes, strange beasts. There is the fact that the great flowering of Dutch art in the 1600s typified by such figures as Rembrandt, Johannes Vermeer and Frans Hals, was a direct result of the fabulous fortunes made from the spice islands to our north. There is the more recent amazing tale of how Daisy Bates, while living in the 1920s with remote Aborigines in the Nullarbor Plain, was instrumental in having one of rarest maps in the world, that of the Bonaparte Tasman Map, donated to the Mitchell Library by one of Bonaparte’s descendants.

This is a book to savour and to learn from and which will serve as a reference to many a historical event of relevance to both Indonesia and Australia.

(Forthcoming in Inside Indonesia)