Worse is yet to come as doubts rise over Chinese vaccines

JAKARTA — For a brief period in May, Indonesia seemed to have gotten over the worst of the COVID-19 pandemic. Daily cases had more than halved compared with the peak in February, and while much of the country was still under social restrictions, there was a semblance of normalcy.

Fast forward two months, and Indonesia is now well and truly the epicenter of the pandemic in Southeast Asia. The archipelago reported 38,391 new cases on Thursday, a record. Its daily deaths of 1,040 on Wednesday was also a record, and the first time the number rose above 1,000.

Here are five things to know about the state of affairs in Indonesia:

What is the situation on the ground?

Daily new confirmed cases first topped the 20,000 mark on June 24 and has exceeded that figure in all but a single day since. It has gotten much worse in recent days, with cases surpassing 30,000 for three consecutive days since Tuesday.

The surge in cases have caused hospital overloads across many regions on Indonesia’s densely populated Java island. Hospital bed occupancy for the six administrative regions, including Jakarta, is currently over 80%. There have also been several local reports of oxygen shortages, which the government has tried to address by diverting industrial oxygen to hospitals.

Despite the government expecting a rise in cases due to the Islamic holiday of Eid in May — the health minister had said the peak usually comes “five to seven weeks” after long holidays — tighter social restrictions, dubbed PPKM Darurat, were not implemented until July 3.

Another official said there was a “desire from the central government” to keep the looser social restrictions until the end of June “so that the second quarter [GDP] growth can remain positive.” How does Indonesia compare with regional peers?

It depends on which metrics one looks at. Using biweekly figures for daily new confirmed cases to smooth out any spikes in data, cases have grown around 120% in Indonesia in recent days, by far the fastest growth rate among the ASEAN-5 that also include Malaysia, Philippines, Thailand and Vietnam.

Malaysia has been registering single-digit increases in recent days, the Philippines is seeing a reduction in cases, while both Thailand and Vietnam are seeing growths of around 60%.

The biweekly growth rate measures the percentage change in the number of new confirmed cases over the last 14 days compared with the number in the previous 14 days.

However, relative to population, Malaysia is the worst-hit country out of the five Southeast Asian nations. According to Our World in Data, Malaysia had 236.48 cases per million people on July 6, a lot higher than Indonesia’s 114.03. What are the causes of the surge in Indonesia’s cases?

Government officials and epidemiologists alike were quick to point out Eid as a key factor for the recent surge. Each year, Indonesians go back to their native villages to celebrate the post-Ramadan holiday with their extended families, in what is known as “mudik,” a potential super spreader event in times of pandemic. The government had imposed travel bans from early to mid-May, but at least 1.5 million people are said to have traveled home to their extended families.

Complacency could have also been a factor. The country’s mobility trend data from Google show that Indonesians had been more “out and about” in the past few months compared with the same period last year.

For example, between early March and early July last year, mobility trends for places like restaurants and shopping centers decreased on average 28% but had only decreased 9.5% during the same period this year. Both figures are compared against the baseline period of Jan. 3 to Feb. 6, 2020.

“It would take a minimum 30% reduction in mobility” from the Indonesian government’s baseline period of May 24 to June 6 for cases to come down, Luhut Pandjaitan, coordinating minister for maritime affairs and investment who heads the central government’s emergency COVID measures, said on Tuesday. “Now it’s still around 26-27%… If this week we can approach 50%, next week we should be able to see a flattening and slowly decreasing [of cases].” Are there any other factors?

The highly transmissible delta variant has also been blamed on the recent surge. Indonesia has a cumulative prevalence rate of 25% for delta, according to the outbreak.info portal from Scripps Research of the U.S., higher than 19% and 14% in Malaysia and Thailand respectively.

“The government did not expect that variants of the new coronavirus such as the delta variant and others would enter and spread very quickly like now,” said a government official, “so that the government’s prediction was that it is enough to only [loosely] tighten social restrictions.”

Nearly 85% of the vaccines Indonesia has received by the end of June are from China, and there have been doubts over their efficacy, especially in fending off the delta variant. Skepticism toward the Chinese jabs were spurred by reports of health workers, mostly vaccinated with China’s Sinovac, contracting COVID-19 and some dying.

Government officials have noted that Chinese vaccines are still effective in preventing serious symptoms and deaths, while breakthrough infections — patients who caught COVID-19 after being fully vaccinated — have been spotted in other countries that use different vaccines.

“[Israel’s confirmed cases] is going up by four to five times. Israel is the fastest country to be vaccinated by Pfizer. [U.K.’s cases] also increased by six times… vaccinated by AstraZeneca,” said Minister of Health Budi Gunadi Sadikin at an event hosted by the Jakarta Foreign Correspondents Club recently, when asked about doubts over Chinese vaccines.

“Yes, there are differences in efficacy between vaccines, but [rise in cases are] because of the delta variants. It hits every country,” he said. 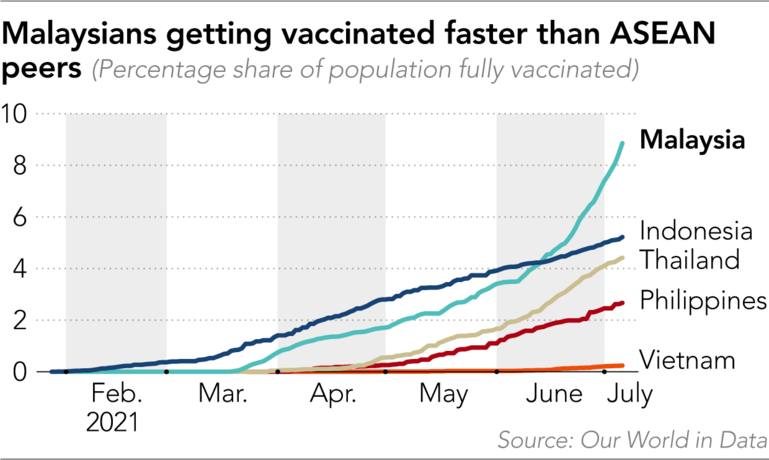 Is the peak yet to come?

Coordinating Minister for Maritime Affairs and Investment Pandjaitan recently admitted that the government was preparing for “a worst-case scenario” of daily new cases topping 70,000.

Tri Yunis Miko Wahyono, an epidemiologist at the University of Indonesia, painted an even bleaker picture. He said if the positivity rate of around 30% remains unchanged and the government manages to increase its daily tests to its target of 400,000 to 500,000, then the data could change with daily cases reaching 100,000. He predicts that the peak could come around a week after the implementation of emergency social restrictions.

“This includes a pessimistic view, because currently there is a lot of self-isolation at home, mixed with positive patients even though they have no symptoms or mild symptoms,” he said. “The potential for transmission is still very high, creating a family cluster. So in my view, the emergency PPKM until the 20th [will] not succeeded in reducing cases.”