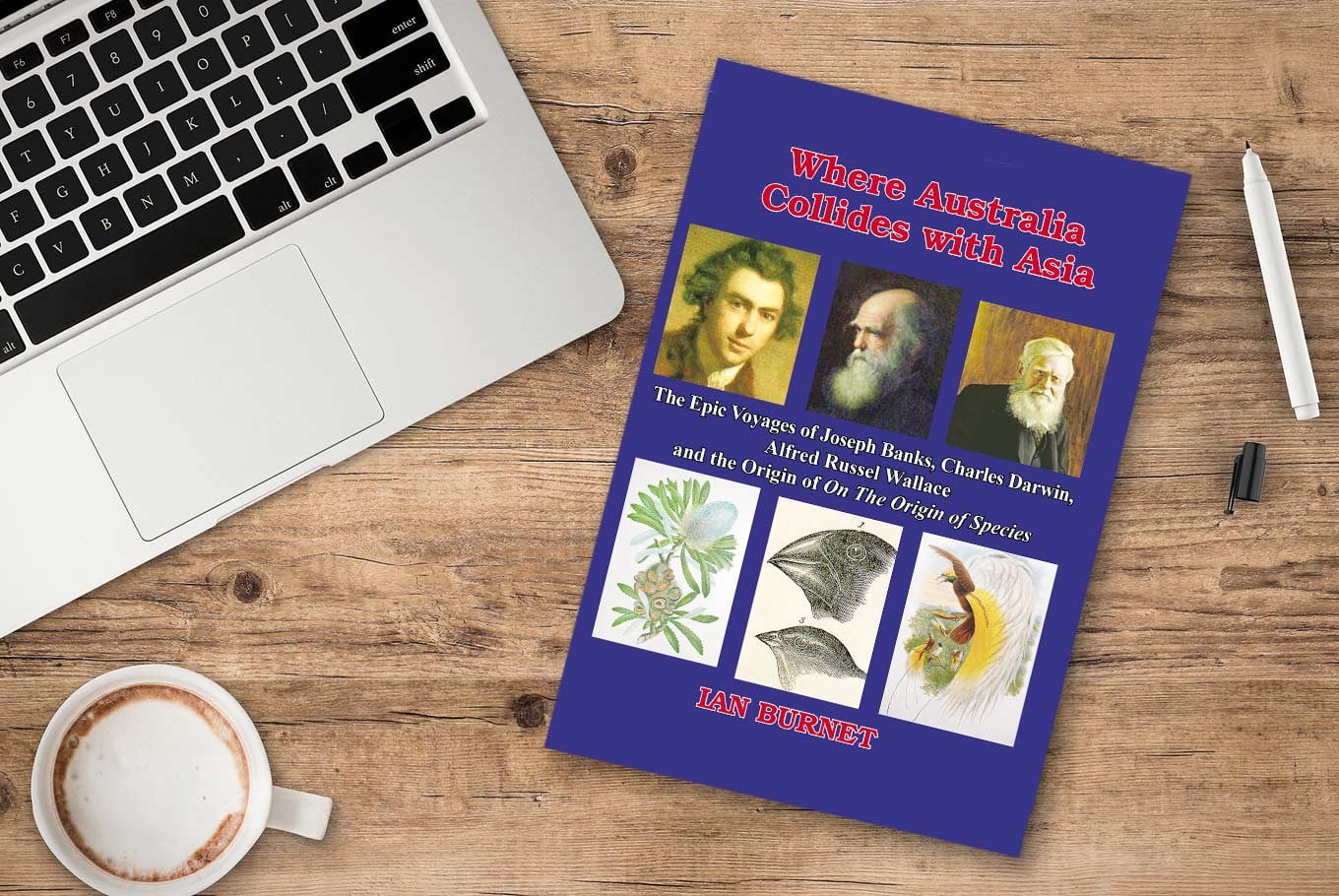 Ian Burnet: Where Australia Collides with Asia: The Epic Voyages of Joseph Banks, Charles Darwin, Alfred Russel Wallace and the origin of “On the Origin of Species”, Rosenberg, 2017, 206 pp. $34.95.

Those of us who have learned Indonesian/Malay can well recall being told how its vocabulary provides evidence of the archipelago’s place in world history. This is reflected, like archaeological layers, in the language.

The initial, lowest, stratum of the language is drawn from the Malayo-Polynesian family of languages that stretches westwards to Madagascar and eastwards to Tahiti and Hawaii. Over time, the language gained additional layers of vocabulary as the Indonesian/Malay archipelago with its very valuable spice islands became integrated into the world’s trade routes: first a layer of Sanskrit from India; then Arabic words from the Middle East; and then topped off with a final “layer” of words drawn from European languages.

Ian Burnet, in his latest book on the Indonesian archipelago, reminds us that for eons preceding the arrival of humans, the Indonesian archipelago was already a meeting place, not of peoples but of the great geological forces that would shape the world that humans were later to inhabit. His book focuses on the lives and ideas of Joseph Banks, Charles Darwin and Alfred Russel Wallace, three of Britain’s most adventurous early naturalists to come to our part of the globe, who played a central role in our understanding of the effect of these geological forces on the diversity of life forms in the natural world.

When Gondwana broke up, the Australian tectonic plate came adrift and has travelled north colliding with Asia. Eastern Indonesia rests on that plate. The plate carries on it flora and fauna (eg marsupials and birds) common to Australia and to those parts of the southern hemisphere such as Africa and South America, to which it was once joined as part of Gondwana. As the Australian plate continues to drift northwards, it pushes against the tectonic plates on which Asia rests causing the volcanic eruptions and earthquakes of this volatile part of the globe. The western half of Indonesia rests on the Asian tectonic plate and has flora and fauna, such as tigers and elephants, which are strikingly different to the natural world of eastern Indonesia and Australia. Many of us know of this division of Indonesia’s flora and fauna through learning about the “Wallace Line”, that passes to the east of Bali and Kalimantan, which is named after Alfred Russel Wallace, one of the three figures about whom this book is written

What Ian Burnet achieves in his wonderfully illustrated and narrated book is to relate the important role the Indonesian archipelago has played in the intellectual history of the West. In their separate voyages Banks, Darwin and Wallace discovered the astounding diversity of the southern hemisphere’s natural world, and it was through their observations that the enlightenment truly came of age. Western thought found it could not reconcile the static divine word of the Bible with the diverse and ever-evolving scientific reality of the natural world.

Not only do we come to appreciate the fundamental intellectual and scientific importance of the voyages taken by these seminal scientific figures, but Ian Burnet’s very perceptive use of quotes from their public writings and private diaries allow us to see through their eyes the world they found and understand the intellectual problems it raised for them. Moreover, in the case of Darwin and Wallace, we enter into their very troubled worlds as they tried to explain the diversity of life they found. We come to understand the way that they separately arrived at the principle of “the survival of the fittest” and that this led them, inexorably, to deny the validity of creationism and hence the God-given “truth” of the Bible. The way that Darwin’s fear of confronting the church weighed on his mind, and led to him resisting publicising his ideas for some 14 years, is a salutary reminder of the somewhat precarious position of science in the nineteenth century. While it is true that people were no longer burnt at the stake for questioning religious tenets, Ian Burnet documents the way that scientists, politicians and even former friends vituperously denounced both Darwin and Wallace. Indeed, Pope Pius IX placed Darwin’s On the Origin of Species on the Index Expurgatorius in order to prohibit Catholics from reading it.

Of particular interest is the way that Wallace and Darwin separately conceived of what is now referred to as “Darwinism”. It is also fascinating to learn of the civil manner in which the fraught problem of scientific precedence was resolved between them, and lead to their close friendship in later life.

There is another perceptive dimension to Ian Burnet’s book. Just as the Indonesian/Malay language has layers to its vocabulary reflecting its historical development, and the archipelago rides on tectonic plates atop the earth’s geological layers, Ian Burnet’s study perceptively illustrates the tiers of Britain’s class structure through the social backgrounds of the book’s three protagonists.

The top layer is represented by Sir Joseph Banks, a leisured member of the British ruling class, who was born into a family of extremely wealthy landowners. Following his voyage with Cook, he was a national celebrity and revelled in the attention. He was elected as President of the Royal Society in 1778, a position he held for the next forty-one years. Among his other positions was being an adviser to the Kew Gardens, a member of the Board of Agriculture, overseeing the Royal Greenwich Observatory and being a trustee of the British Museum.

No wonder his astounding and vast collection of previously unknown plants, mammals, reptiles, birds, insects and marine creatures carefully bought home from his travels failed to obtain from him the degree of often tedious attention required to describe, draw and classify them as a prelude to producing scholarly works. Indeed, his superb Florilegium did not see the light of day until it was published by the British Museum in the 1980’s.

Darwin, being the son of a prosperous country doctor, was somewhat lower down the English social scale than Banks. Although neither Banks nor Darwin ever had to work for their living, the manner of their travels reflected their differential social status. When Banks learned of Cook’s proposed 1768 expedition to the Pacific to view the transit of Venus, he wrote to the Admiralty expressing his wish to accompany Cook on the voyage. Being a fellow of the Royal Society and a friend of Lord Sandwich, Banks’ request was granted. Banks contributed £10,000 of his own money so that he could travel in style in the somewhat limited space of the Endeavour. His private party consisted of the Swedish naturalist Daniel Solander, the Finnish botanist Herman Spöring, two personal assistants, two servants and his two hunting dogs.

In contrast, Darwin’s opportunity to travel was far less planned and almost serendipitous. He had been a somewhat unenthusiastic university student but was an avid naturalist. When he heard that Captain Robert FitzRoy was interested in having a “gentleman scientist” to accompany him on the Beagle, the young Darwin was most desirous of joining the forthcoming trip. However, despite having no need to work and being free to do whatever he liked, he had first to convince his father to let him go.

Darwin’s father considered Darwin’s interest in being a naturalist as a waste of time and saw as foolhardy the proposed voyage that would last for many years. When his father at last relented, Darwin was able to depart on the Beagle in 1831. In contrast to Banks, Darwin travelled alone and had to deal with Captain FitzRoy’s often dark and unstable temperament.

However, en route, he had the means to engage the services of one of the Beagle’s crew, Syms Covington, as his “shooter”. Covington remained in his employ until Covington migrated to Australia in 1839. Many of us know of this relationship through Roger McDonald’s wonderful novel, Mr Darwin’s Shooter.

Alfred Russel Wallace, in contrast to Banks and Darwin, was born into an impoverished middle-class family with seven children and had to leave school at the age of fourteen. Wallace lived virtually his whole working life on the edge of economic disaster. Despite often being reduced to poverty, he was able, through his devotion to naturalism and exploration, to make money selling specimens to British collectors. Despite his life being often one of privation and hardship, the years he spent in eastern Indonesia from 1854 to 1862 during which he collected more than 126,000 specimens, made him one of the world’s foremost naturalists.

While Banks travelled in style with his large party and Darwin had funds to employ Syms Covington, Wallace travelled and worked alone until he recruited a fifteen-year-old Malay boy named Ali as his apprentice. Ali, whom Wallace taught to shoot and skin birds, accompanied him on his travels around Indonesia. During their travels, Ali cooked for Wallace, nursed him back to health during his various illnesses, and helped save both their lives through his boating skills. It is through Wallace’s own words that we come to understand the affection that Wallace held for Ali and serves as an example of the way that the inclusion of copious quotes from the diaries of Banks, Darwin and Wallace makes the book such a delight to read.

While Banks lived out his years as a celebrity member of British society and Darwin had a country home where he could devote himself to his studies, Wallace returned to a precarious life in England only slightly ameliorated by the sales of his highly popular book The Malay Archipelago. It was only when Darwin secured for him a government pension in 1881 that he finally gained a measure of financial security.

Like the geology of the earth we live on, and like British society that founded modern Australia, this wonderfully enlightening and delightful book is many-layered.