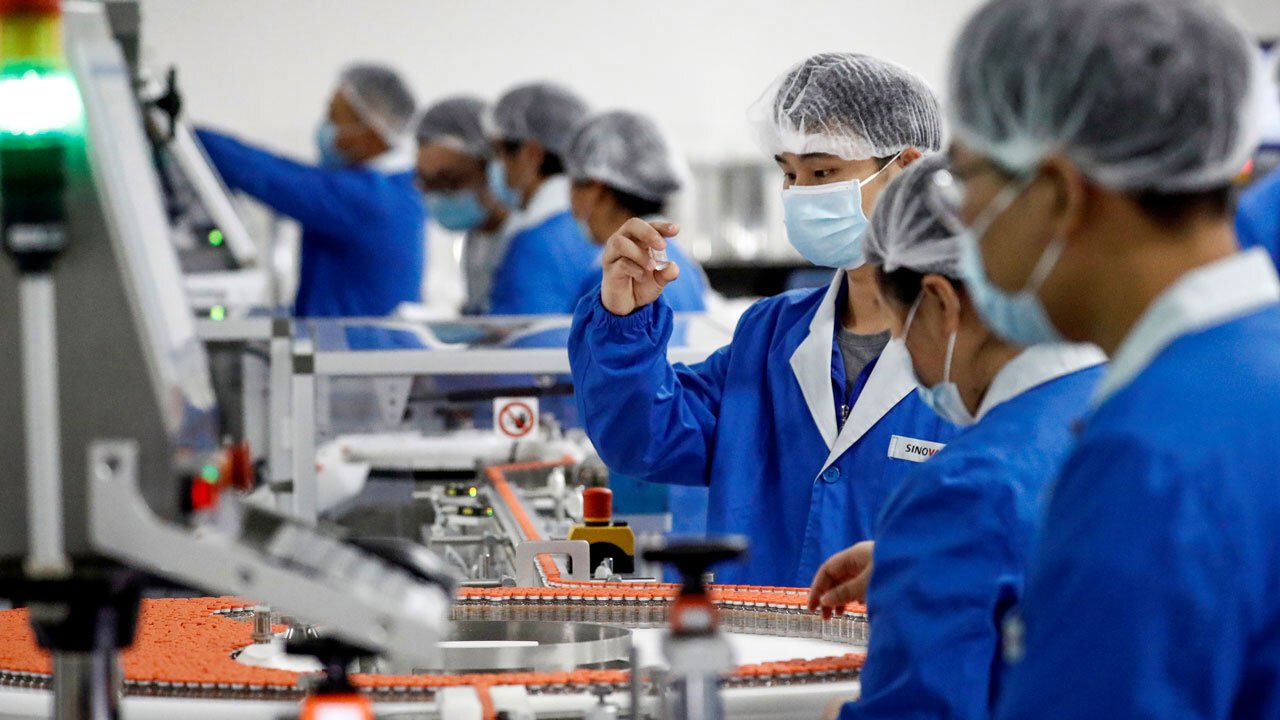 Chinese officials in Australia rarely miss an opportunity to chill relations by turning down the thermostat on our democratic values and way of seeing the world.  Meanwhile, the Middle Kingdom’s men in Jakarta are playing a long and warming game.So far about four million have had their first vaccine shot and around 1.5 million needle two.

Johns Hopkins University tracking data reports more than 1.4 million coronavirus cases and 38,000 deaths in Indonesia.  These are widely considered to be underestimates as testing isn’t free and post mortems rare.

There’s a small plus.   Despite an early sluggish response to the virus, the vaccination programme is moving faster than its Western neighbour. The unabating anti-Communist Indonesians with their sleeves rolled up seem unconcerned the inoculant is politically Red. So far about four million have had their first shot and around 1.5 million needle two.

Sinovac and Sinopharm may not be infused with hypnotics to make patients speak Mandarin, but the vaccines are carrying unsubtle messages. Reinforcing these has been China’s ambassador to ASEAN Deng Xijun, a 38-year veteran of multiple postings in the region.

Australia’s equivalent is Will Nankervis.  Soon after his appointment last October he proved his Canberra credentials with an anodyne masterpiece:  ‘Australia will continue to actively support ASEAN to play a central role in addressing the challenges facing the region… with significant new programs and a new platform for leader-level engagement, coupled with our abiding, deep commitment to ASEAN and its architecture.’

Architecture?  This impotent outdated group of ten misfits couldn’t agree on the colour of a blueprint. No specifics from Mr N, no dollars, no footage of refrigerated containers rolling out of Airbus 380 cargo holds for the nightly news.

Three million ready-to-jabs, one million ‘semifinished vaccines’ and 35 million doses of bulk vaccines have been flown in from Beijing along with excess publicity.

Writing in The Jakarta Post, Deng Xijun said that when his country ‘was in the darkest moments of its struggle with the virus early last year, the governments and people of ASEAN countries offered China timely, valuable and selfless support and assistance.

‘Right after China brought the domestic situation under control, China returned the favour to meet the most urgent needs of ASEAN.

In case cynics might think this assistance is not altogether driven by altruism he added:

‘China doesn’t have any geopolitical agenda, vie for any economic gains or attach any political conditions. The only thing that is on China’s mind is to make the vaccines a public good that is accessible and affordable.’

The love-in follows a senior Indonesian minister Luhut Binsar Pandjaitan, a close confidant of President Joko Widodo, talking to China’s FM Wang Yi about handling the pandemic. They decided Indonesia should be the distribution hub in Southeast Asia.

‘On one hand, China will have Indonesia with its 270 million population as a testing ground for its Covid-19 vaccines and, at the same time secure access to the Southeast Asian market.’

Indonesia is being rewarded for its mateship. No bulk-carrier stand-offs outside Guangzhou while trade ministry calls go unanswered. Last year the world’s largest thermal coal exporter had its ships waved straight into waiting berths to unload 407 million tonnes when the target was 400.

So what are we doing to enhance our standing with nation number four on the big population ladder?  As Aussies know well, our most important future relationship is with the Republic – a message hammered by every successive leader for the past 30 years.  That’s also the time China and ASEAN have been together since starting ‘dialogues’.

In mid-2020 Australia gave AUD 6.2 million to WHO to ‘strengthen Indonesia’s laboratories, improve the way Indonesia collects and uses health information and help to protect patients and health workers at health facilities’.

We’ve also offered an AUD 1.5 billion loan to be repaid across 15 years ‘to support Indonesia’s budget’ as it hurtles into recession, the first since 1999.

Treasurer Josh Frydenberg said the advance ‘builds on our highly valued economic relationship and a strong record of bilateral cooperation,’ but academics haven’t been impressed.  Some told the ABC the money was ‘insignificant in the overall scheme of things … no more than a rounding error in government spending’.

Other economists claimed it was a ‘symbolic gesture’ to calm investors and remind the region us Ozzies are good guys.  One stat puts it in perspective: The Indonesian government has to conjure up AUD 12 billion a month just to handle the pandemic’s impact.

Minister Pandjaitan hasn’t been a lone emissary to the Asian imperium.  FM Retno Marsudi, state-owned enterprises minister Erick Thohir, and defence minister Prabowo Subianto have also made the pilgrimage north.  If this phalanx of power has flown south on similar missions they’ve kept the itineraries secret.  What we do know is that their Australian counterparts haven’t made it to Jakarta.

Fortunately Scott Morrison did get to the world’s most populous Muslim nation for one day in 2018.  This was enough time to pronounce the two nations are ‘not just close neighbours — but great friends.’

In the fight against the plague, it might be more accurate to suggest the PM’s words refer to a relationship elsewhere.  NZ maybe?

Duncan Graham has been a journalist for more than 40 years in print, radio and TV. He is the author of People Next Door (UWA Press) and winner of the Walkley Award and Human Rights awards. He is now writing for the English language media in Indonesia from within Indonesia.