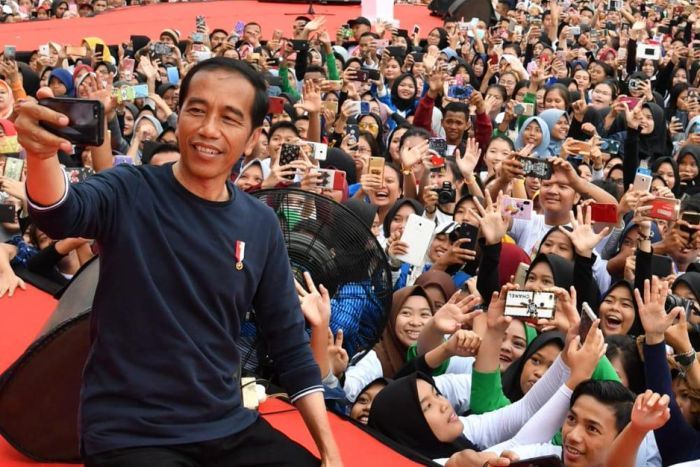 The 2014 Presidential Election revealed the schisms among Indonesia’s three main trade union confederations. Having overcome their differences and worked together to achieve important wins on minimum wages and social security in the preceding three years, they went their separate ways.

Developments in the ensuing years suggested that Iqbal’s concerns about Jokowi, whom he believed had betrayed workers during his time as Jakarta governor, were well founded. Jokowi may have run on a pro-people platform, but his government took the most repressive approach to organised labour the country had seen since the fall of Soeharto.

Even the confederations that supported Jokowi in 2014 have had difficulty challenging this assessment on core issues such as freedom to organise, the right to negotiate a living minimum wage and efforts to ensure that employers respect labour law.

There is of course no guarantee that Prabowo would have delivered on his promises to give workers a better deal on wages, pensions and healthcare – let alone in broader policy domains. In fact, given his record on human rights, a Prabowo victory could have brought even more serious challenges for the unions.

But Jokowi has certainly been no friend of the workers. As a representative of a pro-Jokowi union observed, “There was lots of hope for Jokowi if you listened to what he said when he was running. But once he was elected his actions directly contradicted this impression” (Interview, June 2017).

How, then, did the pro-Jokowi confederations react? Instead of holding him to account, as unions have done with lower level executives in Indonesia’s industrial heartlands, they gave him a free pass for the 2019 elections.

The first sign of things to come in the leadup to the 2014 elections was Jokowi’s choice of running-mate. Over the course of his adult life, Golkar Party operative Jusuf Kalla had built a business empire as well as a political career. Jokowi further strengthened his connections with employers by appointing Employer Association (Apindo) chair Sofyan Wanandi – dubbed by some elements of the labour movement as ‘Mr Low Wages’ – as his adviser.

Another early indication that labour issues were not a priority came when Jokowi bargained away the minister for manpower position, giving it to coalition partner, the National Awakening Party (PKB), rather than to one of three pro-labour figures in his own party.

Once in office, the Jokowi government delayed pro-worker initiatives in the legislature and reinforced controls over union activity in industrial parks and special economic zones. Even more significantly, the new government destroyed the institutional structures of minimum wage-setting(link is external) that had allowed unions to flourish at the local level.

Before Government Regulation No.78 of 2015 on Wages was implemented, unions had an opportunity to leverage local and provincial executive elections, as well as inter-jurisdictional dynamics, to win large minimum wage increases through the country’s wage councils. But the new regulation meant that the wage councils were reduced to rubber-stamps, severing the link between electoral politics and wage-setting that had underpinned unions’ wage success.

The implementation of this regulation prompted all three confederations and several key unaffiliated unions to mobilise. Protests peaked on 30 October 2015,(link is external) when thousands of workers threatened to stay the night outside the presidential palace in Jakarta unless the regulation was repealed.

A Supreme Court rejection of unions’ attempts to secure a judicial review of the regulation prompted more action in 2016, with KSPI mounting demonstrations in some 20 provinces and 150 districts and cities. KSPSI also staged protests calling on the governor of West Java to respect unions’ role in the minimum wage-setting process. On May Day 2017, unions again united in their demand for the repeal of the regulation.

Governors in a number of provinces responded to the protests by signing off on provincial minimum wages in excess of mandated increases in 2016 and 2017. Unmoved, the Jokowi administration took steps to ensure compliance, issuing a circular reminding them that wage increases must conform to the national formula and referring them to regulations outlining their duty to implement national policy. Perhaps as a consequence, there was far less deviation in the minimum wages set for 2018.

Even more worrying has been a return to more direct involvement of the military in industrial relations. This capacity was established during the Susilo Bambang Yudhoyono years by a 2012 Ministerial Decision that limited unions’ capacity to mount demonstrations and facilitated military involvement in protecting industrial parks with “national vital object” status against “threats and/or disturbances”.

The number of industrial parks awarded this status has exploded in the Jokowi years. What’s more, official support for military intervention was expanded in 2018, when the police and the army signed a memorandum of understanding explicitly flagging a role for the military in handling demonstrations and strikes.

Prospects for the 2019 elections

These anti-union measures have taken a toll on Indonesia’s labour movement, which is certainly in a weaker position in the lead-up to the 2019 Presidential Election than it was five years ago. But the unions are still significant enough political actors that both candidates have again sought their support.

Given Jokowi’s track record, an obvious course of action would have been for the confederations that supported him in 2014 to join KSPI and back Prabowo. This is not an option for KSBSI leader Mudhofir, who made it clear in the leadup to 2014 that he was not going to support a presidential candidate with a reputation for human rights abuses. It is also unpalatable for PDI-P cadre Andi Gani, who leads the most politically active faction of KSPSI.

Another choice for these confederations would be to declare that neither candidate is pro-worker and sit the 2019 race out. That way, they could stay true to their principles while also holding Jokowi to account. It would, however, be a difficult choice to make – not least because Jokowi had rewarded them both handsomely for their earlier support, appointing them to lucrative positions as commissaries for different state-owned enterprises.

So, instead, both KSBSI and KSPSI declared for Jokowi on May Day 2018, almost a year out from the election. In doing so, they bartered away any hope of getting a better deal from the incumbent and ensured that the election would be, at best, a rerun of 2014 when it comes to labour.

Professor Michele Ford also spoke to Dr Dave McRae about labour issues in the 2019 election in the Talking Indonesia podcast on 7 March. Listen below or via your favourite podcasting app.

This article was reproduced from the University of Melbourne blog, with thanks.