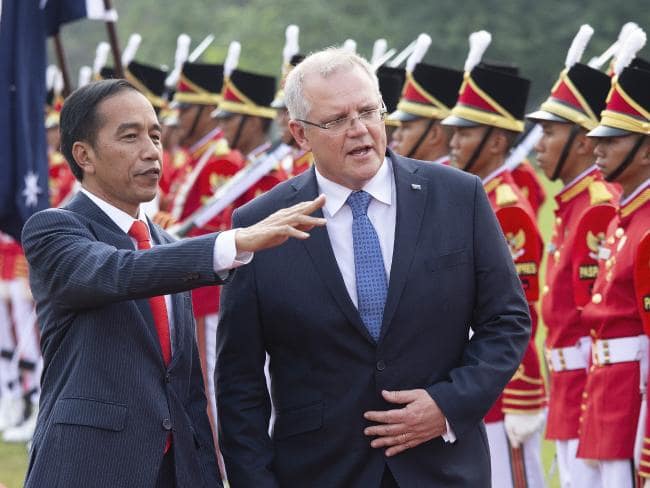 Whilst a reset of the China relationship will be the primary focus for Prime Minister Scott Morrison as he reviews our international relations agenda, Indonesia must also be a priority. And at last, Scott Morrison and President Joko Widodo have a something in common: both incumbent leaders have, within one month of each other, won their respective democratic national elections.

The two leaders also have another, if not odd, common link: their deep religious faith – despite the differences between Sunni-Islam and Christian-Pentecostal, what is important to most Indonesians, including Jokowi, is that people embrace their religion, whatever it is.

So despite the harm caused by the Jerusalem Embassy fiasco there exists a genuine opportunity for the two leaders to rebuild their relationship at a time of immense importance for our region.

Obviously, trade and business would be high on the agenda for the two leaders, however the other key issue – that seemed to be completely disregarded during the Australian election – is defence and regional security.

Indonesia is now taking a strong stance to protect its maritime sovereignty – mostly from illegal poaching of fish stocks – resulting in significantly increased tensions with Vietnam. When combined with China’s expansion of its activities in the South-China Sea and its volatile relationship with the USA, the regional security outlook has not been so uncertain for many years.

Australia has recently signed a free-trade agreement with Indonesia, although this agreement will need to be ratified by both the new Australian and Indonesian parliaments. Known as IA-CEPA this comprehensive economic trade agreement provides an excellent base from which both Australia and Indonesia can expand trade links and business partnerships between our two countries. But much work has to be done before we are able to reap the potential benefits of such an agreement, including the continuing blockage to developing a truly closer and effective relationship: People-to-people links.

Surveys conducted by the respected Lowy Institute show that half of all Australians – including future business leaders – don’t even trust or feel any warmth towards Indonesians yet alone understand them or their culture. Apart from Bali, our lack of knowledge about this nation of 265 million people is deeply worrying, with language studies of Bahasa Indonesia collapsing at the critical high-school and tertiary levels.

Likewise, in Indonesia not much is known or understood about Australia, and sadly most people don’t really care. This is ironical, as throughout Asia there remains a perception about Australia being the ‘big white’ Western country to the south who represents the US interests; failing to acknowledge that today’s Australia is an incredibly ethnically diverse nation with a large and young Asian population.

So what can Mr Morrison do now that will demonstrate that we have gown-up and really are wanting to embrace our critical and mutually vital relationship with Indonesia?

Firstly, language studies must be central to our cultural understanding of Indonesia and the region, and studies of Indonesian must be re-introduced to high schools and at a tertiary level immediately. Language studies must also be expanded to include the general public through a number of quality NGO’s who offer these programs.

Secondly, remove the expensive and bureaucratic tourist visa system that prevents so many Indonesians coming here to meet us. Last year only 100,000 Indonesia holidaymakers visited Australia, yet 9.1 million Indonesians went abroad. Whilst recognising the importance of border security, the Home Affairs Minister can introduce an ETA – the online application visa costing only $20.00 that is currently offered to citizens of Malaysia, Singapore and Brunei – to encourage Indonesians, and in particular the young and highly mobile 90 million strong millennials, to take short duration holidays in places like Australia.

Thirdly, the existing Holiday-Work Visa for young Indonesians needs to be cheaper and with less red-tape from both nations. We also need to ask Indonesia to make it simpler for young Australians to work, study and holiday in their country through the highly successful New Colombo Plan.

Finally, our defence relationship must be expanded and deepened, including the introduction of officer exchanges and defence technology. We now live in very uncertain times and a comprehensive alliance with Indonesia, and also India is critical to our nation’s security.

In some respects, Australia already enjoys a good working relationship with Indonesia, including policing, defence, business, diplomatic and cultural links, but these bonds have very little depth throughout the general community.

Decisive and visionary action, early in Mr Morrison’s third-term, on deepening people-to-people links will see the bi-lateral relationship with Indonesia finally mature, progress and also advance our position with ASEAN.

Ross B. Taylor AM is the president of the WA-based Indonesia Institute Inc. & a former NVP of the Australia-Indonesia Business Council.