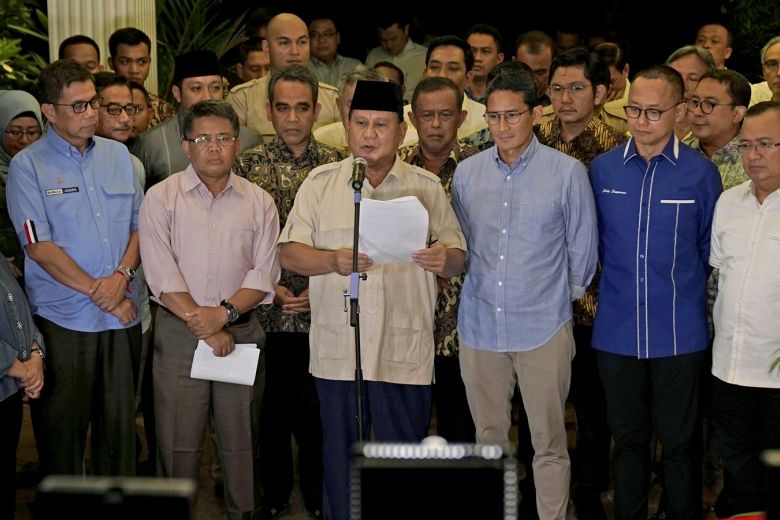 All eyes are on Indonesia’s defeated presidential candidate Prabowo Subianto and his allies after he lost his bid to overturn the April election results and claim the presidency in the world’s third largest democracy.

His coalition was officially disbanded yesterday, and the political parties – his own Gerindra party, the Prosperous Justice Party (PKS), the National Mandate Party (PAN) and the Democratic Party – that came together to back Mr Prabowo’s presidential bid are now free to strike out on their own.

They can choose to be part of the opposition, or join forces with President Joko Widodo, whose camp began making efforts toward reconciliation soon after the April 17 polls, when Mr Prabowo refused to concede defeat.

Mr Joko has even offered strategic seats to the opposition – including in the Cabinet, according to local media. Bloomberg reported that Gerindra’s deputy chairman Hashim Djojohadikusumo, who is Mr Prabowo’s brother and financier, confirmed this month that talks are on, in a hint that leaning towards the government is an option.

But the choice to remain in opposition is still open for the 67-year-old and he has to decide based on his responsibility to his constituents.

Mr Prabowo, responding to the Constitutional Court’s ruling on Thursday that dismissed all his claims of “massive, structured and systematic” electoral fraud, said: “We believe we will not stop here. We can fight for our dreams in the legislative body and other forums.”

He added: “We can consolidate. We have real people power.”

Analysts say Gerindra may maintain its position as the opposition to boost its prospects at the next election in 2024, and it will be supported by its consistent ally, PKS.

But two other allies – PAN and the Democratic Party – may join the government as hinted by their leaders.

Mr Made Supriatma, an ISEAS-Yusof Ishak Institute visiting fellow, told The Straits Times that it is possible for Gerindra and PKS to be outside the government, as happened after the 2014 election.

“They have militant followers. It is no use for them to join the government. They will focus on what they can get in the future,” he said.

Gerindra secured 12.5 per cent of the votes for Parliament, taking over second place from Indonesia’s oldest party Golkar.

The PKS raised its tally to 8.2 per cent this year from 6.79 per cent in 2014, in contrast to the three other Islamic-leaning parties that also reached the parliamentary threshold.

Mr Prabowo’s party will likely not take an “extreme move” by accepting the offer from Mr Joko’s camp, according to Mr Noory Okthariza, a political expert at the Centre for Strategic and International Studies in Jakarta.

“(If they do so), their supporters will be very disappointed. That is not a good option,” he said.

In the wake of April’s polarised election, Gerindra, which now has more constituents, can play a similar role, according to Mr Noory.

While Mr Joko and his running mate Ma’ruf Amin, who won 55.5 per cent of presidential votes, made a call for the people to unite after the election, the big task for Mr Prabowo and his vice-presidential pick Sandiaga Uno is to engage constituents and provide an effective check-and-balance mechanism for the next government.

Ms Titi Anggraini, executive director of the Associations for Elections and Democracy, said: “What is needed from the opposition is to manage the energy of their voters and supporters, who have been very active in politics in the past months, so that they don’t end their participation in electoral politics and instead play an active role as citizens to monitor the performance of the elected government and legislators in realising their campaign promises and programmes.”

SOURCE BY THE STRAITS TIMES