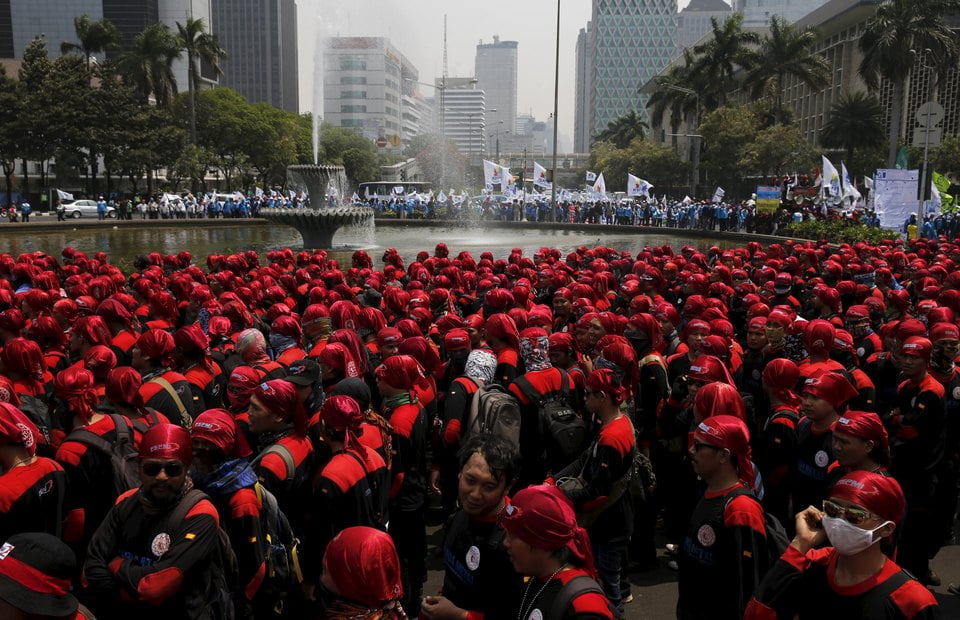 Indonesia’s ranking in the World Bank’s Ease of Doing Business Index has stuck in the low 70s – far from Widodo’s aim at position 40. (Singapore =2, Malaysia and Australia = 14.)

So his government has rammed through more than 1,000 pages of reforms called the Job Creation Law, better known as the Omnibus law. The goals (set before the pandemic hit) are for an annual per-capita income of AUD 32,000 (currently AUD 4,000) and GDP of AUD 10 trillion in the next quarter-century.

The idea is to clean up the thousands of often contradictory Jakarta and provincial regulations impeding development and ensure controls are centralised, as they were before the democratic reforms of this century. Almost 80 laws will be amended and thousands of regulations erased.

That sounds meritorious but the Omnibus is finding it hard to get ignition with four different drafts, varying from 812 pages through to 1,035.

Among the clauses shredding red tape are some problematics. Green tape protections of the environment are also being cut; proponents claim the laws remain strong, but are just being simplified and condensed.

Cynics say it doesn’t matter because any new rules will be snubbed by developers paying off corrupt officials just as past legislation was ignored.

The illegal felling of protected forests for palm-oil plantations in Kalimantan has been underway for years, the smoke from burning trash sometimes blanketing Singapore. In Sumatra endangered species like the orang-utan are losing their habitat to the fellers and their freedom to wildlife traders.

But the sometimes violent protests against the new laws (600 arrests in the first three days), mainly featuring uni students and labour unions, aren’t focussing so much on saving species but protecting jobs. As in Australia, the shift is to the gig economy, welcomed by the big end of town because it gives more room to hire and fire.

It also fractures the unions’ abilities to represent workers who are spread across different jobs in separate locales.

A regular whinge by investors is that the old laws made downsizing costly as workers had to get 32 months salary if dismissed. That’s now down to 19 months.

The minimum wage has vanished, though local governments can bring it back provided it’s based on economic growth

Wage rates will be set according to business productivity, not the employees’ education, skills and years of service. Holidays are being cut from two days a week to one. Long-service paid leave is also being farewelled.

These changes are being cheered by employers’ groups such as the Indonesian Chamber of Commerce and Industry. The government predicts three million jobs for school-leavers and graduates, plus six million for those who have lost work through the pandemic. No sources for these calculations have not been revealed, but a cuff seems likely.

Missing from the chorus line is the International Trade Union Confederation:

‘It’s staggering that while Indonesia is, like other countries, facing the devastation of the Covid-19 pandemic the government would seek to further destabilise people’s lives and ruin their livelihoods so that foreign companies can extract wealth from the country.’

Once the protests subside there’s unlikely to be a rush of capital into Indonesia because the reforms ignore the croc in the therapy pool – the rule of law.

“… many companies – including Australian companies – if they are properly advised, would be reluctant to make large capital investments in Indonesia

‘… the legal and court systems … are almost as opaque and non-transparent today as they were during the presidency of Indonesia’s first president, Soekarno.

‘It is an extraordinary weakness in the development of Indonesia and it’s something that even many Indonesian businesspeople rail about and find very discomforting.’

Indonesia Investments managing director Richard van der Schaar likes the new law but cautions business to wait and see. In a newsletter to members he wrote:

‘ … over the past decade or so we have seen the Indonesian government coming up with various ambitious and ‘game-changing’ programs or plans. However, while they look good on paper, actual implementation in the field has always been the main problem.’

‘Indonesia also has to develop a good track record in terms of policy-making, policy-implementation, policy-monitoring, dispute resolving, and legal and regulatory certainty. Building this good track-record can certainly not be done overnight. On the contrary, it requires years of consistent and quality management.’

In the meantime, the protests continue, though now with pro-Omnibus law rewarded with lunch boxes and water bottles for their time spent waving professionally printed placards.

Who’s organising? The standard reply is the nod-and-wink ‘dark forces’. A synonym is ‘the oligarchy’ of which Widodo, once champion of the wee folk, is now a full member,

Duncan Graham is an Australian journalist writing from Indonesia.