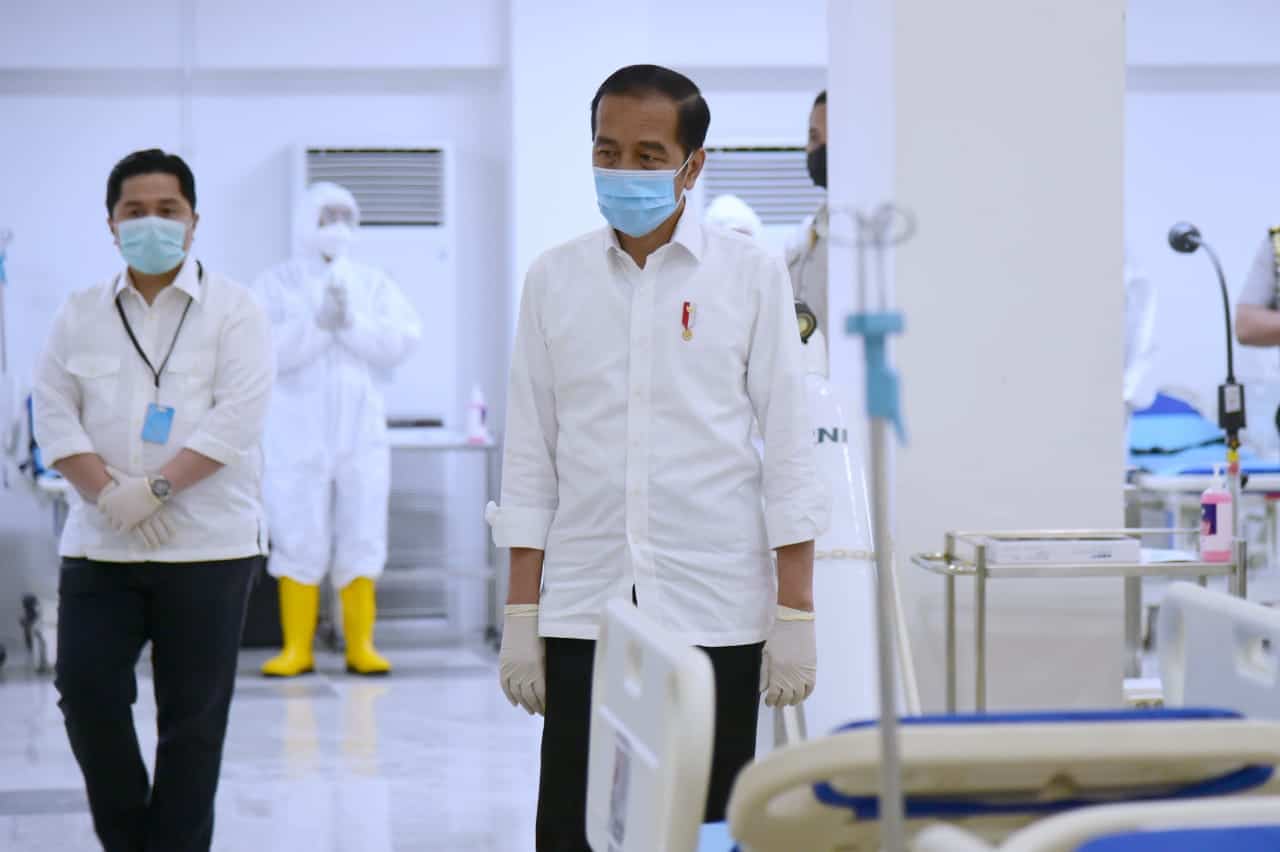 Over the past month, articles and opinion pieces have appeared in the Australian press, deliberating over Indonesia’s COVID-19 response

Statements outlining it has been slow, inconsistent, a waste of valuable time. Not unlike responses in many other countries. However, there are also many statements the economy might fail, death rates might be in the hundreds of thousands, food chains might collapse or riots, looting, or a complete breakdown of civil order might follow. These pieces are filled with ‘what if’ questions and ‘could have’ statements. All suggestive the impact to Indonesia will be worse than in other countries, even one hinting Indonesia is “at its moment of greatest crisis”.

But there is more going on in Indonesia than being reported—and is being prefaced in many foreign-based articles.

So, a few points—in response to the predications—based on in-country press, comments from colleagues, notes from staff and their families all in Indonesia.

From 9 March through to 4 April, the Rp fell to the US, remaining at significant lows between 26 March to 4 April. This created apprehension and issues for many, especially importers and consumers alike. However, since early April the currency has improved and has been on an upward trend. It is still low in comparison to last year, and maybe it will depreciate again, but if it were as glum as these types of statements suggest, lows would continue or decline further. Importantly, statements like the above are not any different to those in other countries.

On Wednesday 6 May, authorities reported 240,726 people in Indonesia were under surveillance (ODP)—those described to have travelled to virus-hit regions or having been in contact with positive cases but do not show any symptoms—and approximately 27,000 people were under treatment (PDP)—who have symptoms typical of COVID-19 and are in medical care but still need their status confirmed through a test. It is difficult to verify the truth of these claims, however, they add an additional component to the regularly made point testing is under-reported.

Case numbers of 2.5 million in Indonesia are not necessarily unrealistic, representing less than 1% of the population. Several other countries are already approaching reported cases accounting for 0.4-0.6% of their populations. And recent reports from a seroprevalence study in Spain suggests 5% of the country had likely contracted the disease—but 90% of cases went undetected. And 240,000 deaths, a horrific outcome in anyone’s books, representing 0.08% of Indonesia’s population, is not all together unrealistic. Spain, UK, Italy, and Belgium already have death tolls approaching or beyond 0.05% of their populations.

However, it has not happened anywhere near as fast as predicted—the model often quoted predicted these figures could be possible by the end of April—and the trajectory of reported cases has not been exponential, as declared in many countries. Likely because it is under-reported, as above, and so the numbers are not being recorded accurately (or precisely). And worryingly, the Governor of Jakarta, Anies Baswedan, reported back in mid-April he could not account for the extra number of funerals in Jakarta in March (40% above the long-term monthly average), except to COVD-19. Although, what is interesting, is there is not a multitude of stories circulating amongst colleagues, friends, or family, indicating someone they know had it, has it, or died unexpectedly. Additionally, it is possible some models, those based on other countries, do not consider conditions particular to Indonesia. Hot, humid weather is oft quoted as a reason for slower transmission, although it is probably too early to tell if this is the case, but external factors, including the weather, are worthy of further examination.

A ‘what if’ question and one appearing repeatedly. And while it can be said Indonesia is a more resilient society compared to the past, individuals and regional authorities are doing more than is often being reported, and companies are stepping up to assist governments in the provision and distribution of necessities in order to ease social impact. Back in late April, the Governor of Jakarta, Anies Baswedan, called on all businesses, including foreign businesses and associations, to assist with his initiative, a “Large-Scale Social Collaboration”, to ease social and economic impacts.

One article noted “While not often reported in mainstream media, provincial authorities, communities and individual citizens are stepping in to help fight the virus,…”, and this is a particularly important point. Regionally, there are examples of local authorities providing sound leadership in these uncertain times. Reports from colleagues, based outside Yogyakarta, noted their village head had incorporated restrictions before April. Another, who returned home to Central Java in March, had their movement initially restricted as a form of quarantine, and was then dissuaded from returning to Jakarta. A strong indication in at least some locations, local authorities and individuals have been taking it seriously. More seriously than other countries.

Although, as elsewhere, there are still occasional gatherings outside of recommended practices (e.g. recent photos circulating in social media in mid-May, showing crowds in Sarina, observing Indonesia’s first McDonalds outlet closing its doors permanently, or queues in Terminal 2 of Soekarno-Hatta Airport).

Notwithstanding the health issues and preparedness of Indonesia for a disease of this nature, there are definitely economic hardships, rising unemployment rates (not to mention the informal employment sector and the monumental issues they face) and many sectors under terrible hardship (e.g. leisure and hospitality). This is no different to other countries, but there is one aspect of modern Indonesian society—in contrast to many others—that is keeping the country mobilised. The Ojek.

The Ojek, or more specifically OJOL (Ojek Online), a delivery system, based on apps linked to hundreds of thousands of motorbike couriers, heavily utilised in Indonesia under normal circumstances—and one which, those of us living or regularly visiting Indonesia, have probably taken for granted—is allowing for continued delivery services. This at a time when supply chains across the globe, have had to modify operations, especially from retail to the consumer. However, the Ojek has been able to rapidly pick up the change of restricted consumer movement.

This in contrast to the UK for example, where it was necessary for consumers to pre-book delivery services from large supermarkets weeks in advance. For many, delivery times were so far ahead as to be futile. Indonesia, however, already had an extensive delivery service in place to ensure necessities can be distributed and delivered to houses under isolation. For Jakarta, under restricted movement, that means continued products for approximately 22 million people (Jadetabek). Something, few other large western cities could claim.

There are, unfortunately, parts of Indonesia suffering economically. Allegedly, Bali has a relatively low number of COVID-19 cases, but it has reportedly been hit hard economically. Unfortunately, it is not necessarily surprising. The sector most likely to suffer significant impacts is leisure and hospitality. Not just in Indonesia, any country. This week the US reported nearly 8 million people have lost jobs in that sector alone—a fall of nearly 50%.

Indonesian business leaders understand the incredible challenge. Of note, Vice Chairwoman of the Indonesian Chamber of Commerce and Industry (KADIN), Shinta Widjaja Kamdani, noted recently any easing of restrictions might not have the desired effect on the economy—i.e. the virus will continue to spread. So, there are some, in business here, concerned about opening too soon. Additionally, transport operators in Indonesia, noted they do not expect any immediate increase in activities, even with the Government lifting restrictions for travel (currently there are conditions, although Government, SOE and essential private sector can travel to virus hot spots).

Bottom line is business leaders do not think there will be the demand as the people here remain cautious about going back to normal. Commentary from businesses in other countries, suggesting caution in re-opening, or outlining issues associated with demand, appear few and far between. However, there is a sense of realism and caution here in Indonesia, above that reported from other countries.

There is a lot more going on here in Indonesia. Much of which is not being reported in depth. And it’s just possible cases aren’t, and won’t rise exponentially, local communities and individuals will continue to take this more seriously than others in other countries, the currency will stay stable and above the lows of late March, government is doing more monitoring than for which they are being credited, companies will continue to rise to the challenge, and aspects re economic activity and supply chains might actually help slow the economic or social impacts seen in other countries.

There is no doubt a long way to go in Indonesia—as in many other countries—but Indonesia’s resilience can also be surprising.

Dr John Ackerman is a director of PT Mitra Asia Lestari based in Jakarta, Indonesia and a former head of the Dept of Agriculture, Fisheries and Forestry based at the Australian embassy in Jakarta. He was also  the regional manager for the Meat & Livestock Australia (MLA). John is a director of the Indonesia-Australia Business Council