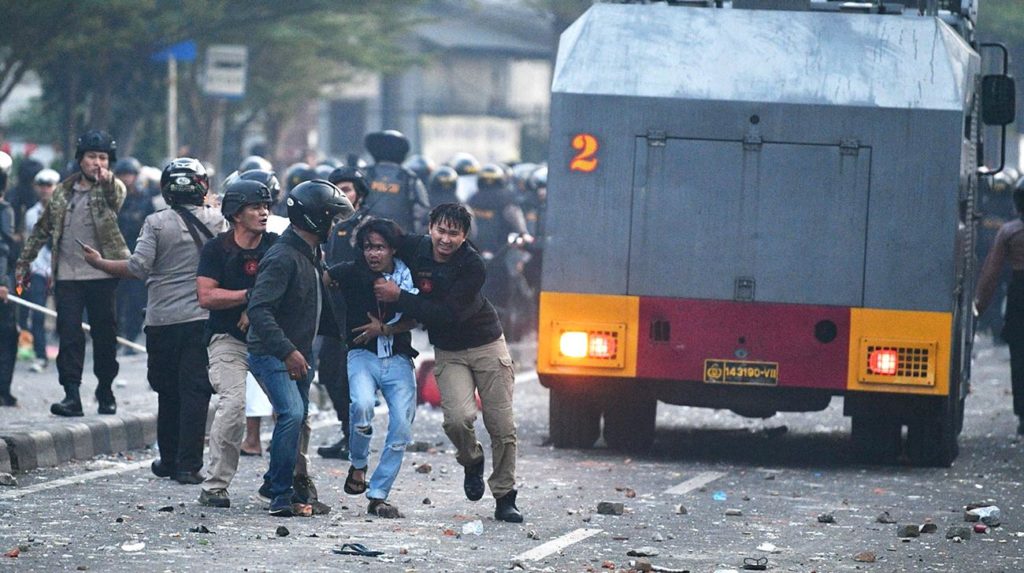 The violent riots that shook Jakarta last week led to at least six deaths, over 700 injured and more than 200 arrests. Demonstrations and rallies are common in Indonesia, but street violence like this had not been seen since the fall of Soeharto in 1998.

Protests began peacefully in front of the Elections Supervisory Agency (Bawaslu) on May 20, after the General Elections Commission (KPU) made the surprise decision to release its official count at 3am that morning.

By 9pm on Tuesday, rioters supporting the defeated presidential candidate, former general Prabowo Subianto, (including some apparently linked to Islamic State) were burning cars and buildings, and using rocks, petrol bombs and fireworks to attack police.

Security forces responded with tear gas, water cannons and rubber bullets. They claim not to have used real bullets, although families of at least two victims claim they died of bullet wounds and the National Police Hospital says autopsies show four died this way.

The violence was repeated the next night and spread beyond Jakarta, with incidents in East Java and Potianak (Kalimantan) as well. The government called in the army to help control the situation. Obviously deeply concerned, it took the extraordinary step of slowing down the internet to obstruct the sharing of provocative material across social media sites. Two nights later, the government seemed to have the situation under control.

On Friday, Prabowo’s campaign lodged protests against the election results with the Constitutional Court. They argue that the convincing 10%-plus margin of victory of his rival, President Joko “Jokowi” Widodo, was fraudulently obtained. To date, they have not been able to produce convincing evidence to back this up.

If, as likely, the court rejects the petition to annul Jokowi’s win, that may well spark another round of rioting. This is particularly so because Prabowo’s camp has been saying for weeks that the court is biased in favour of the government.

But even if the rioting starts up again, it is very unlikely to topple Jokowi, given the government, police and army seem to have closed ranks behind him.

Many members of the elite do not particularly like Jokowi, a provincial politician who made a spectacular leap to the presidency five years ago and remains somewhat of an outsider. But he has the huge advantage of incumbency. Leaders of the bureaucracy and security forces owe their positions, wealth and power to his administration. They fear being replaced in the purge of senior positions that would follow if Prabowo somehow took over.

Even though Prabowo’s fourth bid to become president seems doomed and Jokowi is doubtless confident of being sworn in on October 20, that does not mean Jokowi’s second and final five-year term will be smooth sailing. The riots seem to have fizzled out, but they are the product of tensions over the place of Islam in Indonesian life and what is now a deep cleavage in Indonesian politics.

How the fall of Ahok started it all

To explain how this has happened, we need to go back to 2017 and the major crisis of Jokowi’s first term: the prosecution and conviction for blasphemy of then Jakarta Governor Basuki Tjahaja Purnama (known as Ahok, or BTP, as he now prefers).

Ahok had been the deputy governor under Jokowi and stepped up when Jokowi resigned to run for the presidency. An ethnic Chinese Christian governor was seen as unacceptable to hardline Islamists. They used comments about the Qur’an made by Ahok while campaigning for re-election to launch a massive and bitter populist campaign against him. Hundreds of thousands took part in rallies that targeted Ahok and, eventually, his former friend and close colleague, Jokowi, at one stage even marching on the palace.

After Ahok’s fall, some of the Muslim organisations that had formed the so-called “212 movement” to tear him down began aggressively targeting Jokowi. In response, Jokowi has taken tough measures against them, including giving himself new powers to ban civil society groups. He also backed criminal charges against figures he saw as leading public criticism of his government.

As a result, the disgruntled Islamist conservatives who loathe Jokowi lined up behind Prabowo, the only alternative candidate.

This split meant that many members of the world’s largest Muslim organisation, Nahdlatul Ulama (NU), which is generally more tolerant of religious difference, sided with Jokowi, particularly after he chose NU leader Ma’ruf Amin as his running mate.

The world’s second-largest Muslim organisation, Muhammadiyah, traditionally NU’s rival, was officially neutral. But many of its members clearly sided with Prabowo. So did other, more conservative, Muslim organisations, such as the Islamist PKS party, and more extreme groups like the thuggish Islamic Defenders Front (FPI) – and, of course, the 212 alumni.

The result was a vicious social media campaign, full of trolling, hoaxes and conspiracy theories, fake news and online vilification. Rumours that Jokowi is a closet Christian from a communist family were circulated once again.

The election thus polarised Indonesia, reviving old divisions in an atmosphere of renewed anxiety about ethnic and religious identity. Jokowi prevailed in Javanese communities linked to NU and in areas where non-Muslims are a majority or a large minority, like Papua, Bali, East Nusa Tenggara and North Sulawesi.

On the other hand, majority Muslim outer islands often associated with Muhammadiyah largely fell to Prabowo, such as West Sumatra. Likewise, Prabowo took back South Sulawesi, Southeast Sulawesi, Bengkulu and Jambi from Jokowi, who won them in 2014.

West Java tells the story. Although part of Java, it has never been a NU stronghold but is seen as historically a centre for Islamist conservatism. It went for Prabowo. Jakarta, urban and more urbane, but on the cusp of West Java, was split.

Prabowo’s defeat does not spell the end of his supporters’ aspirations for a less tolerant Indonesia that privileges their brand of Islam. The election’s geopolitical polarisation is likely to be a continuing source of problems for Jokowi in the years ahead.

With NU in the vice-presidential office and very likely to continue its stranglehold on the Ministry of Religious Affairs, resentment from Muhammadiyah, PKS and others will be maintained. It will play out in conflicts in the legislature and in and around government.

The tough measures Jokowi’s administration – obviously worried – deployed in recent weeks to try to head off the riots has only exacerbated the situation. Former general Wiranto, now coordinating minister for politics, law and security, ominously formed a team to investigate “unconstitutional behavior”.

Twenty or so people linked to Prabowo, including two former generals, have been arrested on charges including treason and weapons smuggling. At one stage a warrant was issued to bring Prabowo himself in for questioning (although this was quickly rescinded).

These measures reflect a wider trend towards so-called “soft authoritarianism” in Jokowi’s administration, which has concerned many Indonesian and foreign observers. It also feeds the narrative promoted by his Islamist opponents of a president willing to use the full force of the state to marginalise them, and that simply entrenches the battlelines.

Jokowi is a pragmatic politician who values stability and cohesion above most other things. Once the riots die down, Jokowi’s instinct will be to “buy in” the Muslim right and Prabowo’s core supporters. He may do this by offering them positions in the incoming administration or access to resources.

If that doesn’t work, we can expect more trouble ahead.