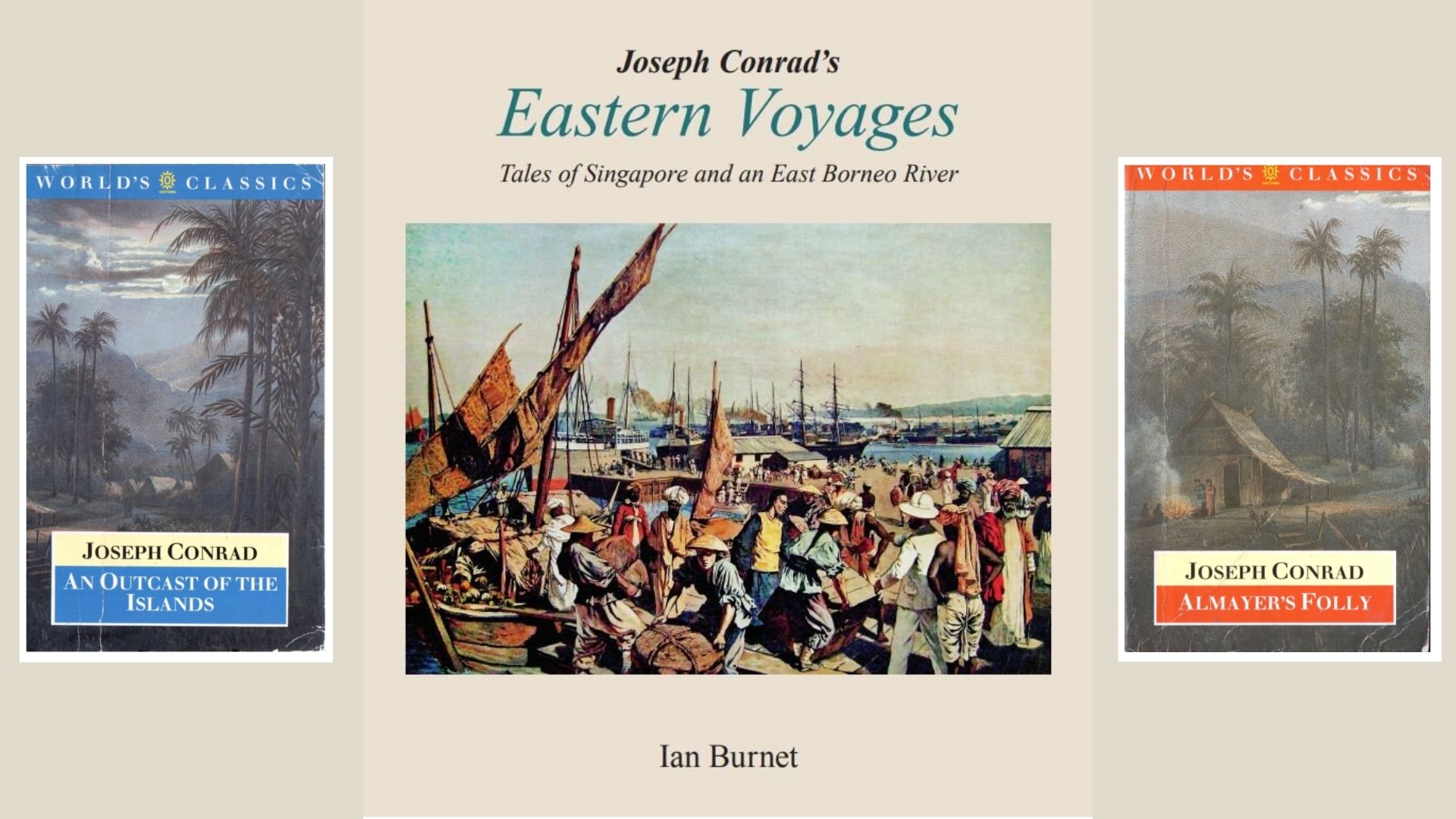 Ian Burnet: Joseph Conrad’s Eastern Voyages: Tales of Singapore and an East Borneo River, Sydney: Alfred Street Press, 2021 (164 pages and 40 colour images); print copies for $35 from http://www.ianburnetbooks.com/, or as an e-book for $19 from Booktopia.

For many of us, Joseph Conrad is known as being the famous English author of books such as Lord Jim and of Heart of Darkness (which was made into a famous film). Those of us who live in Sydney may, on seeing his plaque on Circular Quay’s writers walk, have been surprised that he had visited our shores: 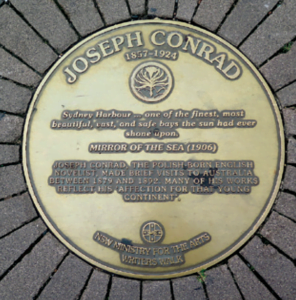 However, Joseph Conrad’s Eastern Voyages, the book under review, has many more surprises for us, and particularly for those with an interest in Indonesia. Far from being an “English author”, he was in fact born in Poland in 1857 and at birth was given the name of Józef Teodor Konrad Korzeniowski. His childhood was one of severe deprivation: his father was a Polish patriot and the family was arrested by the Russians and banished to the severe climate of northern Russia. The hardship of his childhood included experiencing the death of his mother while in detention, and subsequently the death of his father after his release due to ill-health. The rest of his youth was spent in the Russian-held part of Poland and later in France.

From an early age, Józef had his heart set on a becoming a mariner. His life as a sailor began with four years on French ships before, at age 21, he arrived in England in 1878 where, with minimal English, he enlisted in the British merchant marine. For the next fifteen years Konrad Korzeniowski worked on a variety of ships first as a lowly crew member (steward, apprentice, able-bodied seaman), before achieving papers as a third, second and then first mate, before he eventually achieved the rank of captain. 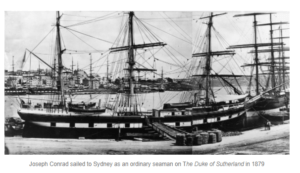 Konrad loved sailing boats and was unwilling to serve on boats powered by steam. He spent much of his time as a mariner sailing in Southeast Asia between Singapore and Borneo. His intimate knowledge of the Indonesian archipelago arose from his four voyages as first mate on the steamship Vidar travelling to a small trading post some forty miles up a river on the east coast of Borneo. His maritime life led to great adventures including being signed on with a Belgian company to travel far inland into Africa up the Congo River. It was this experience that provided the basis of his novel Heart of Darkness. Later in life, his main role was captaining clippers between Europe and Australia.

His last long-distance voyage was in 1893 as captain of the Torrens from Adelaide to London. Among the passengers was John Galsworthy, a 25-year-old lawyer and future novelist with whom he struck up a friendship. Armand, a first mate, is the protagonist of one of Galsworthy’s first literary attempts, The Doldrums (1895–96), and this character is obviously modelled on Konrad. When the Torrens docked in London, Konrad left his maritime career to settle in England, and, at age 36, began his writing career under the pen name of Joseph Conrad. 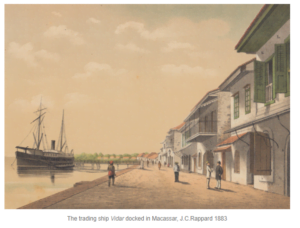 Burnet’s fascinating study shows how Conrad’s writings drew on his own experience and how the characters he met, particularly in Indonesia, became central to the wonderful novels that gave him such a significant place in English literature. It is all the more astounding when one realises that English was in fact Conrad’s fourth language, after Polish, French and German.

Through historical research and by drawing on Conrad’s autobiographical writings, particularly his A Personal Record, Burnet has managed to document the voyages the author made and the people he met that were later woven into his many novels. In a masterful and incisive manner, Burnet analyses events and characters from Conrad’s own life to show how they inspired and indeed are reflected in the events and characters of Conrad’s novels, particularly The Rescue, Almayer’s Folly and An Outcast of the Islands. 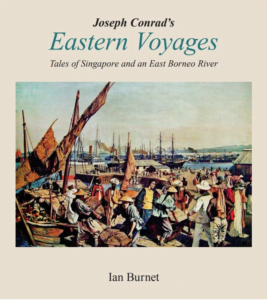 Given the length of time Conrad spent in Borneo and in the Indonesian archipelago, it is clear he knew Malay, the lingua franca of the many linguistic communities of the islands. He knew much of local colonial events, and had met many local characters. For example, he was well aware of the role played to the north by James Brooke, the Rajah of Sarawak, and his descendants, who inspired characters in his novels. It is fascinating to see the way that the historical alliances and events of the colonial era are reflected in Conrad’s writing and, as Burnet reminds us, Conrad wrote his all books by drawing from his memories only after he retired to England at a relatively early age. However, that he had a desire to become a writer had been a long-standing one and is reflected in the fact that, during his many years at sea, he carried with him an outline manuscript for his first novel, Almayer’s Folly.

Aided by Conrad’s autobiographical writings, Burnet masterfully manages to blend Conrad’s own life experiences with the plots of his novels so that we have a real sense of daily life and adventure in Southeast Asia, and particularly the Dutch East Indies. Joseph Conrad’s Eastern Voyages is highly recommended and will lead many of us to read or re-read Conrad’s books, with new understanding.

While reading about Conrad in Burnet’s study, I was reminded of the writings of Somerset Maugham and in particular his short stories. Maugham’s travels through the late-imperial world of the 1920s and 1930s inspired his works that portray the then day-to-day European colonialism in Southeast Asia, India, China and the Pacific. Like Conrad, Maugham drew on his own life experiences to create the characters and events that serve to make the era come alive. 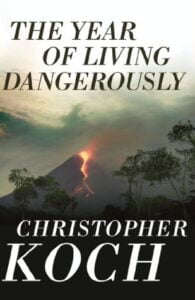 More recently, I have had another experience of an era coming alive through a creative literature. I have just finished re-reading The Year of Living Dangerously by Christopher Koch. This novel is set in Jakarta in 1965, the last year of President Sukarno’s rule, and I can attest to its veracity in creating, through fiction, the atmosphere and geographical reality of that time. In that year, I was in Jakarta collecting material for my honour’s thesis on Sukarno and indeed managed to have breakfast with him, an astounding opportunity for a young Australian undergraduate. I experienced many of the day-to-day events and places that feature in the novel. In re-creating 1965 Indonesia, and particularly Jakarta at the end of Sukarno’s era, Christopher Koch was ably assisted by his brother Philip, who was the ABC’s Jakarta correspondent during those tumultuous years. Indeed, the fact that the main character in the book is the ABC’s correspondent in Jakarta leaves one wondering to what extent the novel’s protagonist reflects the actual life experiences of his brother. Similarly, when reading Conrad’s novels, one is left wondering what is fiction and what is the reality that Conrad experienced in his own life.

At the end of his career, Conrad told an interviewer that he simply wrote in retrospect of what he saw and learnt during the first 35 years of his life. It is this that led Burnet in his creative endeavour to disentangle Conrad’s life from his fiction. Alas, with Christopher Koch we have no such guide.

Ron Witton gained his BA and MA in Indonesian and Malayan Studies from the University of Sydney and his Ph.D. from Cornell University. He has worked as an academic in Australia and Indonesia and now practises as an Indonesia and Malay translator and interpreter.