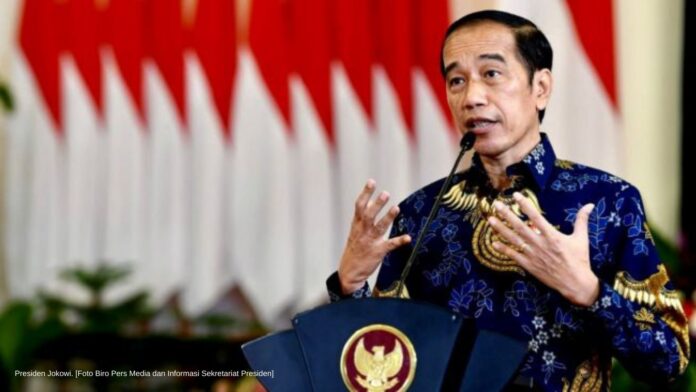 Side-stepping any alignment with super powers allowsIndonesia to reap the benefits of the new trilateral agreement.

The debut of AUKUS – the trilateral military grouping between Australia, the United Kingdom and the United States – has sent a shockwave across the Indo-Pacific. Prime Minister Scott Morrison’s government seems to have turned its back on Australia’s newer partners in Asia in favour of older bonds with historical allies in the Anglosphere.

In response, Indonesia’s Ministry of Foreign Affairs issued a five-point statement in which it claimed to be “deeply concerned over the continuing arms race and power projection in the region”. Such statements are de rigueur for Indonesia and cast little light on how the new arrangement will impact the country.

Since President Sukarno’s fall in 1967, Indonesia has adhered to the foreign policy doctrine of “free and active” and will not by choice align itself to any regional or global superpower. But this does not exclude pursuing its perceived interests from time to time with one great power or another.

Given that Indonesia will not be seen to align itself with either the US or China, AUKUS presents both challenges as well as opportunities.

Indonesia’s present needs under Joko Widodo, better known as Jokowi, are complex and nuanced, but mainly centre on the economy. The US and China are equally indispensable for Indonesia. Despite China’s position as Indonesia’s largest economic partner, the US remains economically and strategically crucial to Indonesia, especially as a counter-balance to China’s influence and might.

Given that Indonesia will not be seen to align itself with either the US or China, AUKUS presents both challenges as well as opportunities. Strategically, Australia’s participation in the new grouping may even benefit Indonesia in defending its territorial integrity in the Natuna Sea against Chinese encroachment, albeit indirectly.

Australia was no doubt partially pushed into AUKUS by China’s various punitive trade sanctions following Morrison’s support for an inquiry into the origin of the coronavirus. AUKUS should therefore be a lesson for China that harsh tactics may just drive a regional power, like Australia, further from its orbit.

For Australia, AUKUS’ tactical advantages may be delayed since the nuclear-powered submarines will not be built until the 2030s, but its symbolism as Australia’s answer to China’s attempts to cow it into submission is unmistakable. The proposed eight submarines stand in contrast to China’s six vessels of the same specifications.

Beijing’s almost muted reaction to the new partnership is an indication that it may have recognised this.

China may want to rethink the highhanded tactics it used against Australia when it comes to other regional players such as Indonesia, which has repeatedly shown that the issue of sovereignty over the Natuna Islands and its surrounding waters is non-negotiable, even in the face of economic coercion.

Singapore, long under pressure from Beijing to choose a side, seems cognisant of what Australia’s accession to AUKUS means for other countries within the context of US-China rivalry. Prime Minister Lee Hsien Loong said he hoped that AUKUS would “contribute constructively to the peace and stability of the region”.

Indonesia may have felt it needed to caution against a possible arms race following the declaration of AUKUS because, realistically, Indonesia will not be part of that race. The April incident in which an ageing Indonesian Cakra-class naval submarine was lost at sea illustrates the country’s lack of readiness.

Nevertheless, AUKUS may influence Indonesia’s defence procurement, the country having vacillated between various manufacturers of fighter jets in an attempt to upgrade its air force. For a time, Russian Su-35 fighters were considered before Defence Minister Prabowo Subianto reportedly became keen on American F-35 jets and French Rafale fighters. Indonesia will likely settle on those fighter jets least likely to incense either China or the US, giving France’s Rafale bid an advantage over the others, unless a new contender appears on the horizon.

While AUKUS may present new challenges to Australia’s relationship with the Indo-Pacific, there is little reason to assume that it will negatively impact its ties with Indonesia in the long run.

Strategically, Australia’s augmented military capabilities under AUKUS may alarm the ultra-nationalist faction within the Indonesian establishment, which has perpetuated the belief that Australia was instrumental in the secession of East Timor, now Timor Leste, from Indonesia. It has also popularised concerns that Australia might do the same for West Papua.

In any escalation of US-China rivalry created by AUKUS, however, the Indonesian government may be hoping to benefit from windfall investment and trade opportunities that the change of dynamics presents. The economic angle remains Indonesia’s paramount interest under Jokowi. The number one mission of any Indonesian diplomat overseas is to increase trade between Indonesia and the country he or she is posted to.

Already, there are signs that the US-China rivalry has given Indonesia an economic edge. In March, Facebook and Google announced plans to build undersea internet cables to connect North America and Indonesia. The news came after plans for similar cables between North America and Hong Kong were scrapped following US government concerns over spying. US tech giant Microsoft built its first Indonesian data centre in 2020, with a second currently under construction.

As the US-bound Scott Morrison prepared for his first face-to-face meetings with his fellow “Quad” leaders last week, the ABC reported that he had phoned Jokowi during his flight, presumably to brief him on AUKUS and reassure him of Australia’s continuing commitment to Indonesia.

While AUKUS may present new challenges to Australia’s relationship with the Indo-Pacific, there is little reason to assume that it will negatively impact its ties with Indonesia in the long run. However, the new alliance will be a source of both angst and opportunity for Jakarta in equal measure.

This article first appeared in The Interpreter, published by the Lowy Institute.