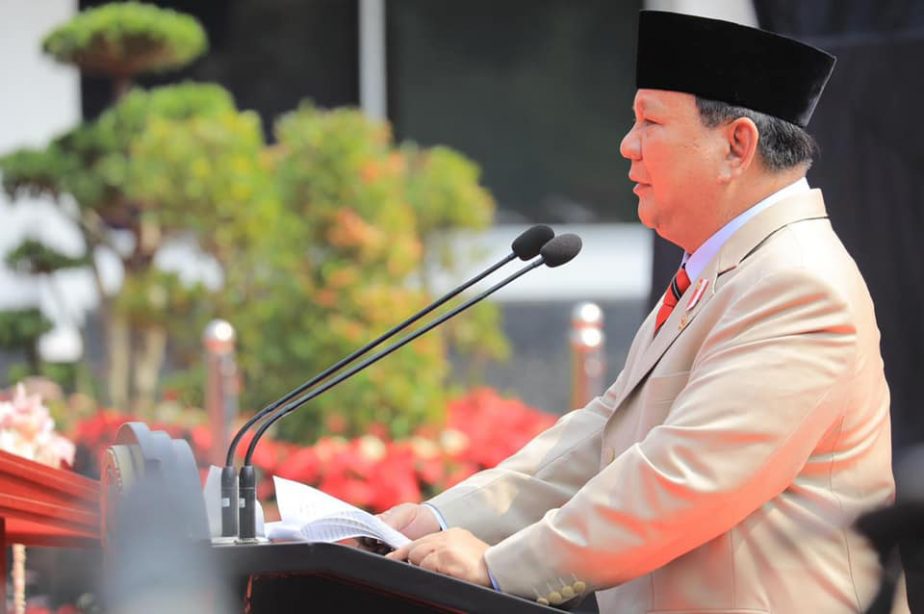 By Noto Suoneto and Ananta Evander

Nearly two years on from his surprise appointment, how do the efforts of the Indonesian Defense Minister hold up?

Since Prabowo Subianto was appointed Indonesia’s Defense Minister in October 2019, shortly after his defeat in that year’s election, he has rarely been away from national and international attention. Regarded as the best performing minister among President Joko “Jokowi” Widodo’s cabinet by a recent Indo Barometer survey, Prabowo is nonetheless facing tremendous pressure to prove that his ministerial appointment was not only the result of post-election political horse-trading.

In his first year-and-a-half as minister, Prabowo has shown an awareness of the importance of building more robust security and defense partnerships with countries worldwide. He has met and visited his counterparts from Japan, China, Turkey, France, Russia, the United Kingdom, and even the United States, after Washington lifted a long-standing ban on his entry to the country. His defense diplomacy is predominantly filled with discussions of arms purchases, including offsets and technology transfer agreements, cooperation in the development of local defense industries, and increasing defense cooperation mainly to overcome non-traditional security threats.

“Fighter jet diplomacy” has been a prominent feature of Prabowo’s defense diplomacy, such as the commitment to South Korea’s KF-X Joint Development fighter program and his push to purchase fighter jets including the Sukhoi from Russia, the Eurofighter Tycoon from Austria, and the F-16 from the United States. Some analysts suggest that the wide variety of purchases’ negotiation is intended to reduce Indonesia’s dependence on any single supplier, considering the past U.S’ arms embargo toward Indonesia. However, acquiring aircraft from different manufacturers increases the changes of logistical challenges in terms of maintenance, and limits the potential for offset agreements and technological transfers.

Prabowo’s frequent overseas trips have received a lot of criticism domestically, mainly from opposition groups who claim they have had little impact. Jokowi defended Prabowo by against the critics and saying that his trips are “for defense diplomacy, not just traveling.” Yet it is still worth asking whether his diplomatic efforts have brought any positive benefits to Indonesia.

Amid the major power rivalries, particularly between China and the U.S., Indonesia’s strategic geopolitical position at the convergence of the Indian and Pacific oceans has made the country become one of the top spots for influence competition. Indonesia’s key role as a middle power is also important for its contribution to the solution of global challenges. Prabowo’s defense diplomacy can be deemed as a balancing effort amid the growing great power contest, a diversification of security and defense partnerships that also manifests Indonesia’s traditional preference for a “free and active” (bebas-aktif) foreign policy.

After nearly two years in power, Prabowo has largely kept his promise, made to the House of Representatives in 2019, that Indonesia’s international defense outlook would seek friendly relations with other states in support of a defensive military strategy. Prabowo’s diplomatic maneuvering has indeed enhanced Indonesia non-aligned stance: with many defense partners, Indonesia will not be trapped into one or a group of military suppliers. The advancement of security cooperation will also drive more chances for a greater diplomatic, political, and economic partnership with these nations. However, the critical question about Prabowo’s defense diplomacy is on its coordination with Indonesia’s overall foreign policy strategy.

On many occasions, Prabowo and Indonesian Foreign Minister Retno Marsudi have synergized their positions on several regional issues. One such occasion was the recent 2+2 meeting with their Japanese counterparts, when the two ministers seemed aligned in their priorities for bilateral cooperation with Tokyo. Both officials emphasized a coherent commitment to building more vigorous economic and maritime defense collaboration. During the meeting, the two countries shared grave concern over the continuation and escalation of an attempt to change the status quo by force and agreed on the importance of rules-based maritime order – a clear statement reference to China’s military movements in the South China Sea.

The concerns about fostering peace and stability in the Indo-Pacific region is not only the goal of the Foreign Ministry but also an integral part of Indonesia’s defense policy, as laid out in the 2015 Defense White Paper. The mutual and consistent coordination between these two front actors of Indonesia’s foreign policy must be maintained. Moreover, herein lies two suggestions for Prabowo.

The first is that Prabowo’s current defense diplomacy is generally inward-looking, focusing on domestic security rather than regional security needs. Most of the topics discussed in his overseas visits have focused on developing Indonesia’s defense industries and cooperation to address non-traditional security matters such as counterterrorism and cybersecurity. Prabowo should be more active in positioning Indonesia as a regional leader and pay more attention to regional challenges. His statement at the ASEAN Defense Ministers’ Meeting Retreat in 2019, that ASEAN members should not be separated or polarized as it would only cause conflicts and discordance, should proceed beyond rhetoric. The political proximity of some ASEAN member states to two major global forces, the U.S. and China, is a reality. Prabowo should work closely with the Foreign Ministry to engage the pragmatic paradigm of other countries in support of the goal of regional unity and “ASEAN centrality.”

Second, domestically, Prabowo has faced a number of challenges. He recently become the target of public and parliament scrutiny due to a defense systems spending proposal amounting to $125 billion over the next five years. The proposal is criticized for being untimely, infeasible, and nonsensical in light of the nation’s current struggles to contain the COVID-19 pandemic. Prabowo’s time as defense minister has also been packed with controversies and debates that have detracted from his diplomatic efforts. To pursue Indonesia’s national defense goals, Prabowo must avoid or overcome domestic hurdles that might disrupt the nation’s progress.

Arguably, Prabowo lacks objectives, strategies, and narratives designed to address regional and global security issues. Even though he has provided the outline of Indonesia’s defense during his statement in the Indonesian Parliament two years ago, which focused in “Total People’s Defense” principle, the current application of this principle to traditional security issues like the South China Sea disputes is questionable. Additionally, his administration’s reluctance to update the six-year-old Defense White Paper has caused Indonesia’s defense strategy to proceed without a clear direction. Moreover, his “Total People’s Defense” narrative clashes with his proposal of addressing the country’s national defense deficit through the substantial purchases of advanced military technologies.

Furthermore, Prabowo has failed to present Indonesia’s clear position on questions like the South China Sea dispute and U.S.-China rivalry to either the Indonesian public or foreign governments. During the January 2020 breach of Indonesia’s South China Sea territory by China’s coast guard and maritime militias, Prabowo persuaded the Indonesian public to “stay cool,” but was unable to lay out a strategic approach for addressing the incursion.

During his bilateral diplomacy, Prabowo has rarely made any statement clarifying Indonesia’s position about the South China Sea except at the most recent ASEAN-China Defense Minister’s Informal Meeting, held earlier this week, when he registered a request to continue the substantive negotiations with China over a Code of Conduct for the South China Sea.

While Prabowo has attempted to conduct “shuttle diplomacy” in order to enhance Indonesia’s role on the global stage, it is questionable whether he has conducted it to address Indonesia’s national defense deficit or to support ASEAN’s Outlook on the Indo-Pacific: that is, whether he has pursued a national or regional goal.