What is Ma’ruf Amin doing? 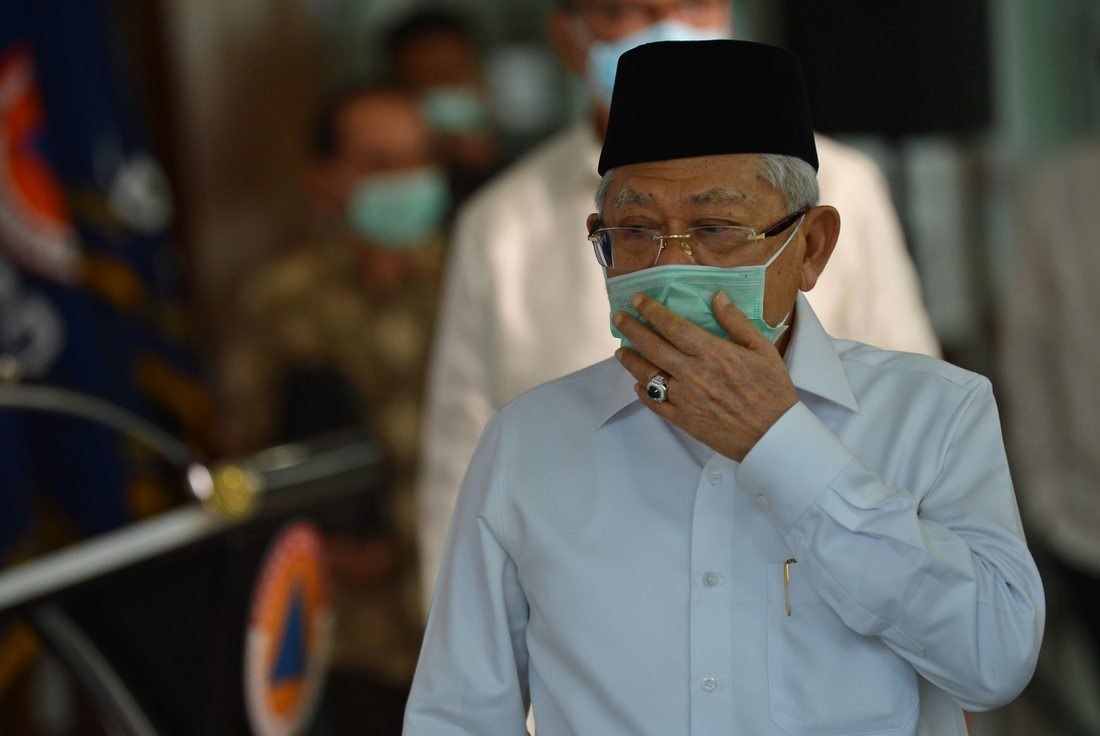 During the early days of the Covid-19 pandemic in Indonesia, Vice President Ma’ruf Amin claimed that prayers from religious leaders had kept the country coronavirus free. Photo by Aditya Pradana Putra for Antara.

The hashtag #MarufAminNgapain (What is Ma’ruf Amin doing?) first appeared on Twitter four months ago, on 11 March. Coinciding with Ma’ruf Amin’s 77th birthday, the hashtag highlighted the vice president’s lack of leadership while his country was muddling its way through the early stages of the Covid-19 pandemic.

The government that President Joko “Jokowi” Widodo and Ma’ruf lead certainly deserves criticism for its response to the pandemic. While neighbouring countries were closing their borders and preparing their citizens for lockdown, Jokowi and Ma’ruf’s cabinet spent much of February playing down the seriousness of Covid-19.

Health Minister Terawan Agus Putranto, for example, was “insulted” by a Harvard University study that suggested Indonesia had undetected cases of Covid-19, and suggested that prayer had kept the virus at bay. Ma’ruf echoed this sentiment, saying that prayers from religious leaders had kept Indonesia coronavirus-free.

On 2 March, however, Jokowi finally confirmed Indonesia’s first cases of Covid-19 and even conceded that his government had suppressed information to curb mass panic.

The government’s early indecision was a sign of things to come.

But after a gathering of 16,000 pilgrims in Malaysia resulted in more than 500 Covid-19 infections, Ma’ruf did little to stop a similar mass gathering planned for 18-22 March in Gowa, South Sulawesi. On 19 March, the South Sulawesi provincial government eventually called it off, but not before thousands of pilgrims had already arrived. Predictably, the gathering led to Covid-19 clusters emerging in multiple regions across the country.

On 23 March, Ma’ruf asked MUI to issue fatwas on other issues, including bathing of the dead infected with Covid-19, and performing ablutions (wudhu). Five days later, MUI obliged.

But the effect of these fatwas is uncler. A fatwa recommending social distancing in worship had been issued on 17 March, but it failed to dissuade organisers of the mass event in Gowa to cancel. It also failed to convince some mosques to adhere to government guidelines on social-distancing. There are also many stories of family members attempting to “steal” bodies from hospitals so that they can be buried according to Islamic burial rites, with one confirmed instance in Makassar resulting in police arresting three people.

Jokowi chose Ma’ruf as his running mate in August 2018 to bolster his Islamic credentials, but also to co-opt the MUI chairman. Ma’ruf’s authority and brand of Islamic orthodoxy had helped to ensure the political demise of Jokowi’s political ally, the former governor of Jakarta, Basuki “Ahok” Tjahaja Purnama. Jokowi believed having Ma’ruf on his side would be a boon to his cabinet. Yet, when the country needed strong leadership from an authoritative Islamic figure, Ma’ruf has been largely silent.

Can Ma’ruf’s lack of vice-presidential leadership – particularly over the public aspects of religion – be explained by the fact that he continues to be play a role at MUI?

On 3 September 2018, less than a month after Jokowi had picked Ma’ruf as his running mate, Ma’ruf announced that he had resigned as supreme leader (rais aam syuriah) of Indonesia’s largest Islamic organisation, Nahdlatul Ulama.

MUI’s internal guidelines state that the office of MUI chair cannot be held concurrently with political office, but this only comes into force when the person is elected to public office. During the campaign, MUI’s Advisory Council therefore did not replace Ma’ruf, but simply changed his status as MUI chair to “non-active”.

When he finally assumed the vice presidency, however, Ma’ruf did not resign, but rather stayed on as “non-active chair”. Moreover, he remains chair of MUI’s National Shari’a Council (Dewan Syariah Nasional), Indonesia’s sole arbiter of Islamic banking and finance. He is yet to suggest when he will be relinquishing either title.

Since Ma’ruf’s election to the vice presidency, MUI’s two deputies have assumed most of his responsibilities. As deputy chair Muhyiddin explained, MUI plans to finally appoint a new chairman at its next national congress in November. “It is our hope,” he said, “that we will no longer be an extension of the government’s hand; we must be independent.”

The bill was proposed by the nationalist and Jokowi-affiliated Indonesian Democratic Party of Struggle (PDI-P), so Ma’ruf was also committed to supporting it. Unfortunately for him, MUI, NU, and several Muslim-based political parties were harsh critics of the bill and eventually blocked its deliberation.

Muslim groups’ primary concern with the bill was its proposed distillation of Indonesia’s five-point state philosophy, Pancasila, into three principles, via the trisila concept, and then into one, gotong royong or “mutual self-help”. Muslim groups believed the three principles, socio-nationalism, socio-democracy, and cultural divinity, would detract from the first principle of belief in one Almighty God (Ketuhanan Yang Maha Esa). They claimed the bill would therefore make Indonesia more vulnerable to the influence of communism.

Ma’ruf’s track record suggests that before his election as vice president, he would have surely led the charge to block the RUU HIP. It was Ma’ruf who once convinced President Susilo Bambang Yudhoyono that a joint decree banning the Ahmadiyya (a sect that identifies as Muslim but which most Muslims consider heretical) was an appropriate response to the infamous 2008 Monas Incident, when Islamist hardliners violently attacked peaceful protesters calling for religious tolerance. It was also Ma’ruf who, as MUI chair, had issued the religious opinion that stated Ahok had committed blasphemy, and which played a key role in Ahok’s conviction.

In his new role, however, Ma’ruf asked his former colleagues to entertain the Pancasila bill. What explains this apparent change of heart?

One explanation is that Ma’ruf’s leadership in MUI had become more symbolic than authoritative as early as 2016, as former MUI Fatwa Commission deputy chair KH Ahmad Ishomuddin has explained. Indeed, Ishomuddin has said he believes Ma’ruf’s decision to sign off on the religious opinion that effectively sealed Ahok’s fate was not the result of Ma’ruf’s own convictions, but rather Ma’ruf bowing to internal pressure within MUI.

If this is true, it might explain why Ma’ruf’s response to issues within the vice-presidential mandate Jokowi gave him of managing “religious life” has been to ask MUI to issue fatwas rather than to take charge himself.

Another possibility, not incompatible with the other, is that the septuagenarian Ma’ruf, perhaps sensing he will only serve one term as vice president, is more concerned with what he sees as his legacy. This may be why, in the midst of the Covid-19 crisis, he has focused on promoting his aspirational “shari’a economy” (ekonomi syariah). He believes it is a viable alternative to Indonesia’s capitalist economy and that it could rid Indonesia of economic injustice.

Ma’ruf has now been honoured twice for his work on shari’a economy: first, as “Mr Indonesian Shari’a Economy” by Sultan Syarif Kasim State Islamic University (UIN) in Pekanbaru, Riau; and second, by the Indonesian Muslim University (UMI) in Makassar, which granted Ma’ruf an honorary doctorate in shari’a management on 23 June.

Whatever the reason, Ma’ruf has been a conspicuously inactive leader as vice-president, even though the Covid-19 pandemic has created a stream of problems for government and the community relating to religious life, from the mass gatherings in Gowa, to mosque attendance, to whether Muslims should mudik (travel home to their families at the end of Ramadan).

Ma’ruf has a history of politicising religion, but as the number of confirmed Covid-19 cases rises, Indonesia needs a strong, decisive second-in-command. Jokowi opted for a vice president who has dedicated his career to Islamisation rather than policymaking – and events suggest that choice was far from ideal. Now it falls to Ma’ruf to prove his doubters wrong.