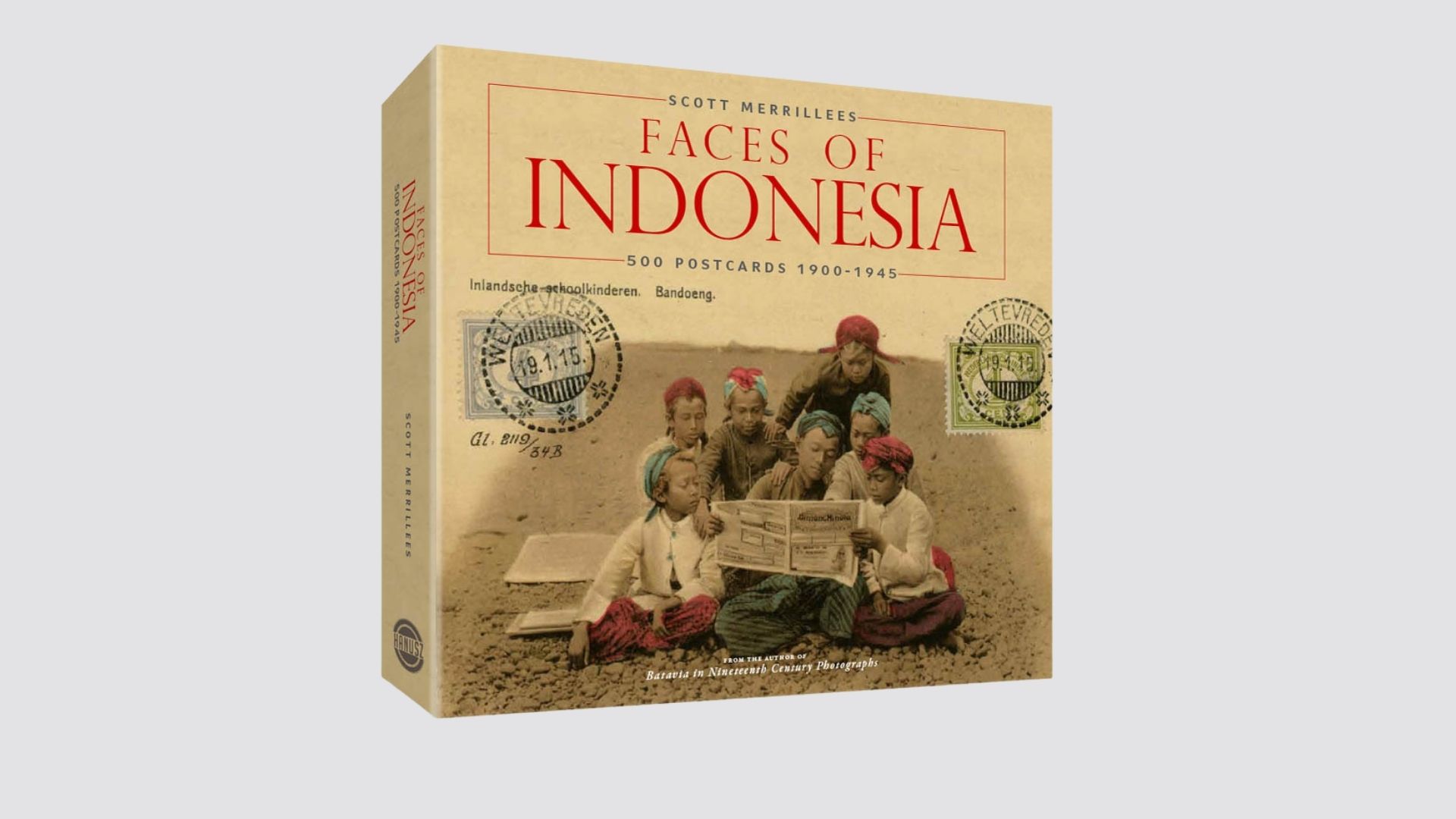 So, when did you last send someone a postcard? It used to be an integral part of travel: remembering who to keep in touch with; choosing a card that would mean something to them; sharing one’s latest news; writing the person’s name and address; going to the post office to buy stamps and, if in foreign parts, using one’s pocket dictionary at the post office to try to buy the correct stamps.

Nowadays, sending a postcard while travelling probably ranks with the now almost forgotten act of writing and posting someone a letter. As our “devices” have taken over our lives, postcards, like letters, are no longer the way we keep in touch while travelling. Nevertheless, many of us probably still have around the house treasured postcards from exotic places sent by family and friends. They often still adorn the odd noticeboard, mirror or fridge, or otherwise are gathering dust in drawers, while we resist any inclination to throw them out.

Faces of Indonesia: 500 Postcards 1900-1945 reminds us of the role postcards used to play and shows how they can be used to re-create a world that has been lost. Scott Merrillees’ wonderful historic postcards allow us to time travel to a world that is no more and see the people who lived there. The postcards come from all over the archipelago and feature the parents, grandparents and great-grandparents of present-day Indonesians. For those who know Indonesia and have travelled there, it shows us the great variety of clothes and lifestyles that were current in the first half of the 20th century. Since the revolution, the new nation of Indonesia has achieved a surprisingly high level of national integration through the creation of a national language and national identity. This has been aided through the adoption of a “modernity” that has tended to weaken the distinctive diversity of the myriad tribes, ethnic groupings and languages that had constituted the Dutch East Indies. One needs to remember that in the past, most of the people living in what is now Indonesia would not have been able to talk to one another given they spoke regional languages, and that very few would have had knowledge of other regional languages or of Malay or Dutch. In addition, the people living there included those who had come from elsewhere such as from China and India, who had contributed further linguistic, ethnic and cultural diversity.

Merrillees’ excellent text draws from publications contemporary to the delightful and captivating postcards, so as to give us a social and historical context. In that regard, the book is in the fine tradition of Michael Portillo who so cleverly uses his Bradshaw’s Guides to compare the present to the lost past.

The book is divided into six geographical chapters, beginning with Sumatra in the west and the last covering the islands of eastern Indonesia. The text of each chapter provides the geographical, historical and social context to the postcards from that region. Each chapter is also accompanied by old, coloured maps that also transport us back in time. As a whole, the volume provides a visual feast of the great variety of people and their lives in the Dutch East Indies in the forty-five years prior to Independence.

I am sure anyone who delves into this treasure trove will find their favourite postcards. Let me just indulge myself by sharing some of mine with you.

Along with the postcard, it is worth recalling the role that telegrams played throughout the world, including of course the Dutch East Indies, bringing important tidings of joy, tragedy and life-changing events.

Postcard 165 “Telegram Deliverers”, from around 1910 in Batavia (now Jakarta), shows an occupation at the turn of the century that would have been a familiar there as it would have been elsewhere in the world, whether in Wagga Wagga, Bangkok or Leeds. However, the people in the picture and their surrounds clearly posit this vanished occupation in Indonesia. 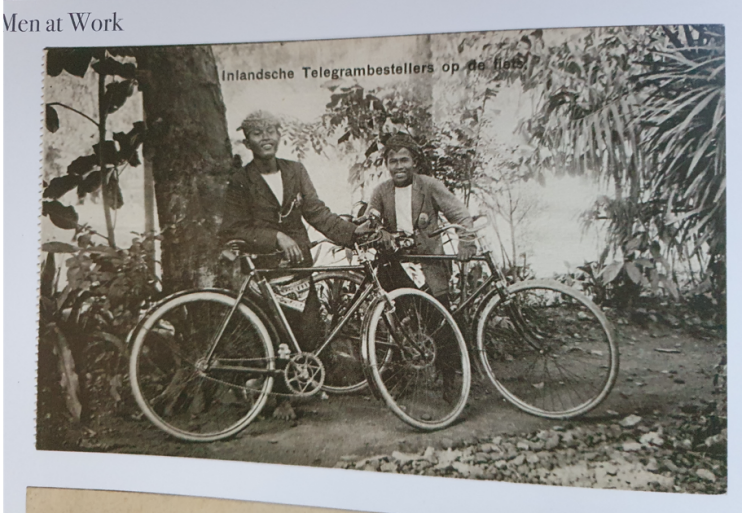 Similarly, Postcard 189 from 1902 shows an occupation that reflects the experience of many women throughout the world. 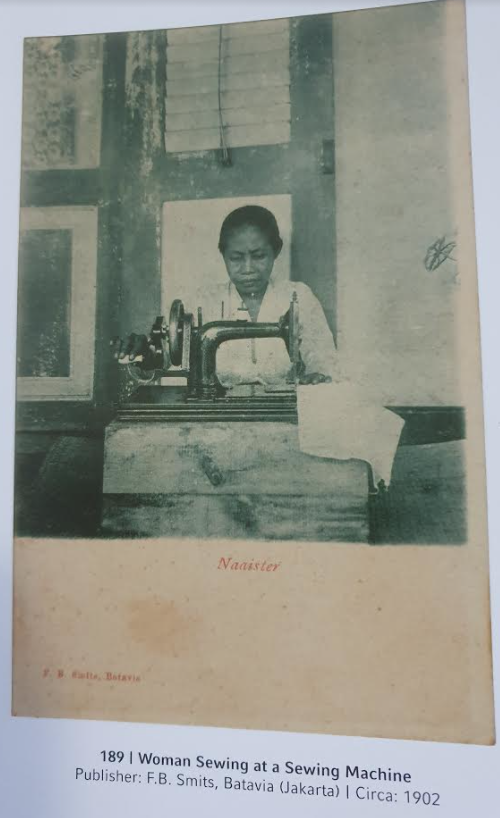 There are postcards that illustrate the vast differences in life between the social strata. For example, the Japanese occupation and war brought hardship to many as this 1940s postcard of food distribution in Madura by the Red Cross shows: 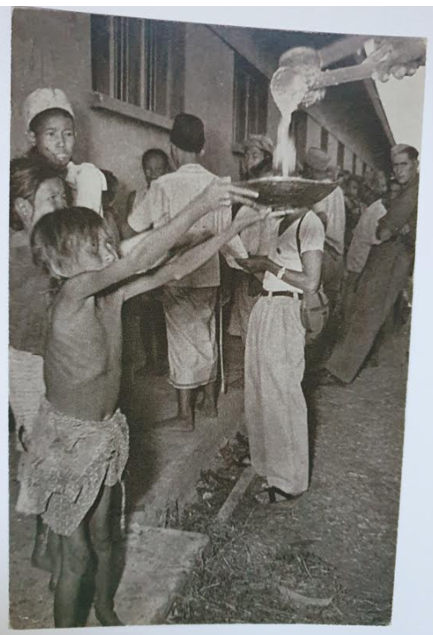 One cannot but wonder about the life this child led from this moment of time captured on this postcard.

In contrast, we also see the life of members of the privileged elite. For example, Postcard 102 shows Pakubuwono IX, the ruler of Solo, in 1910. The stamp and its postmark, somewhat spoiling his regal atmosphere, reminds us that we are looking at postcards. Indeed, some of us might remember occasionally having so much to say, that we failed to leave room for the stamp which then had to be affixed to the front of the postcard. 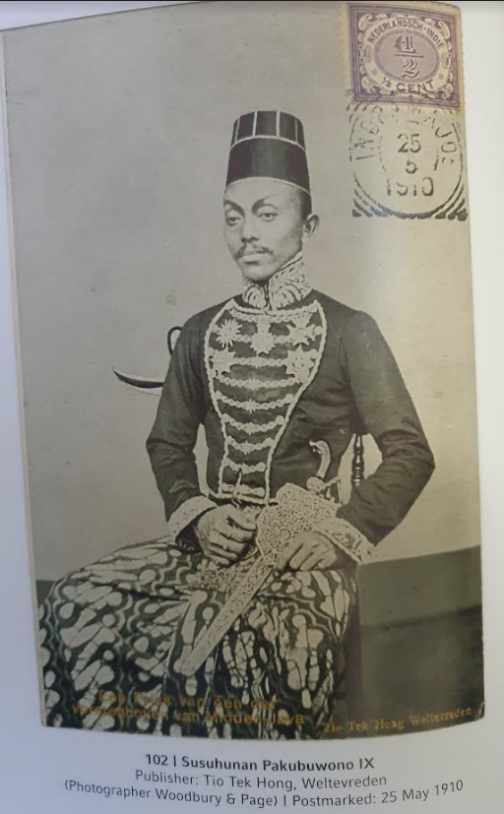 Sometimes people had so much to say that their actual news spilled over from the back to the front of the postcard. Such postcards, for those of us with a smattering of Dutch, give us a chance to try to decipher what was being reported to their dear ones. Here for example Pakubuwono X would seem to be trying to remain oblivious to the encroachment of someone’s pressing news. 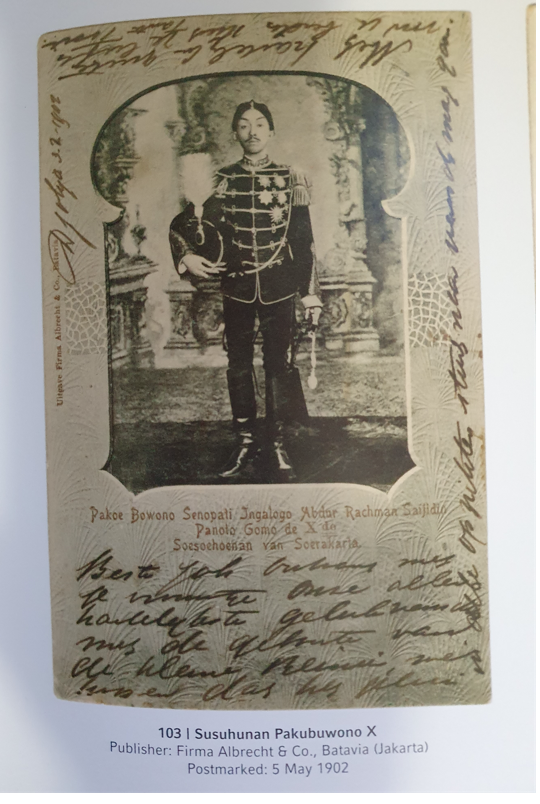 Merrillees in his accompanying chapters uses additional photos to give context to the postcards. For example, in this case, one can see a Balinese photographer at work and allows us to see what the subjects appearing on the postcards might occasionally be experiencing: 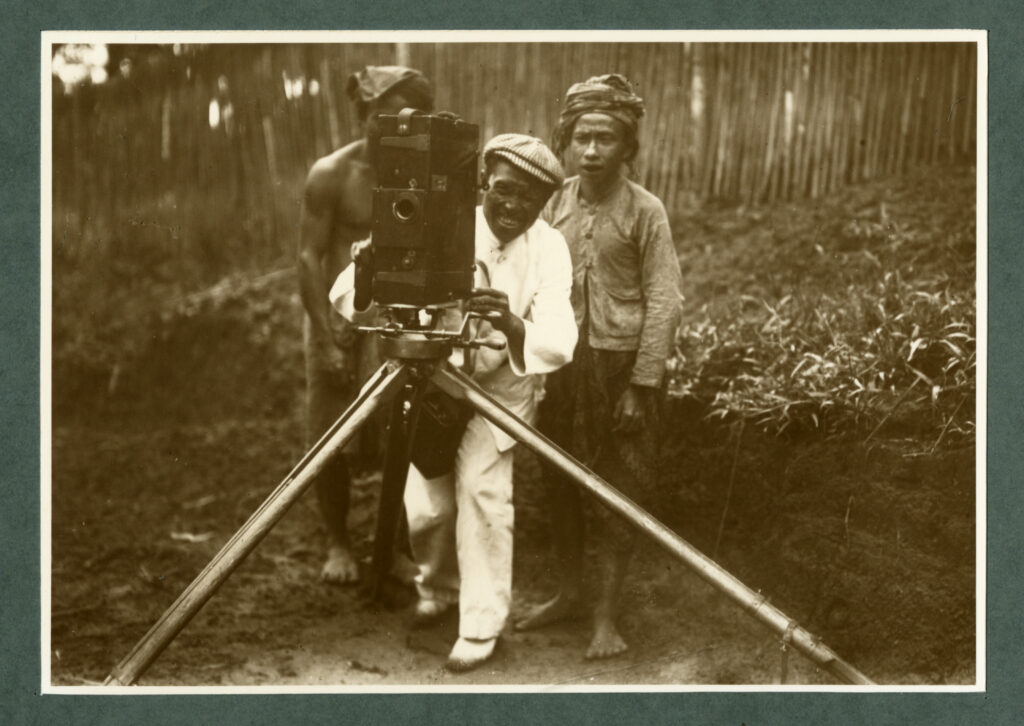 As one might expect, the majority of the photographers were European and male. An exception was Thilly Weissenborn (1889-1964), a leading professional photographer in colonial Indonesia.  She left behind an outstanding legacy of beautiful photographs.  She was a pioneering photographer in Bali in the early 1920s, although she mainly lived and worked in West Java, particularly Garut. 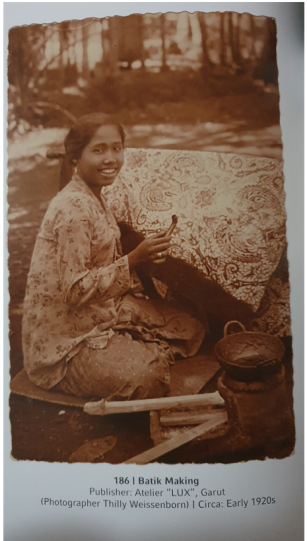 Exceptions to the European predominance of the photographers were the Indonesian photographer Kassian Cephas (1845-1912) and his son Sem Cephas (1870-1918). There are several of the father’s postcards in the book. Here he captures a dramatic moment in a game of cards:

The vast majority of the postcards in the book are in black and white, though some of them were later “coloured” for publication. However, there are some postcards which are early examples of colour photography, such as those taken in Paris in 1931 of a Balinese Baris Dance and Gamelan troupe who travelled there for the Colonial Exposition:

The book has illustrations of people from one end of the archipelago to the other, and on looking through them, I was struck by the fact that photographs of women, even in devout Islamic areas, often show them not wearing a hijab, despite the fact that Islam had come to Indonesia many hundreds of years previously. This makes one realise the relatively recent influence of middle Eastern influence and Islamic fundamentalism.

The postcards document not only the wide ethnic diversity of Indonesia’s indigenous population but also the many immigrants who arrived in Indonesia over the centuries, including Arab traders as well as Chinese and Indian labourers brought by the Dutch to work on their plantations. For example, Postcard 56, dated 29 May 1908, is of Chinese “Coolies” at a tobacco plantation in Binjai, North Sumatra: 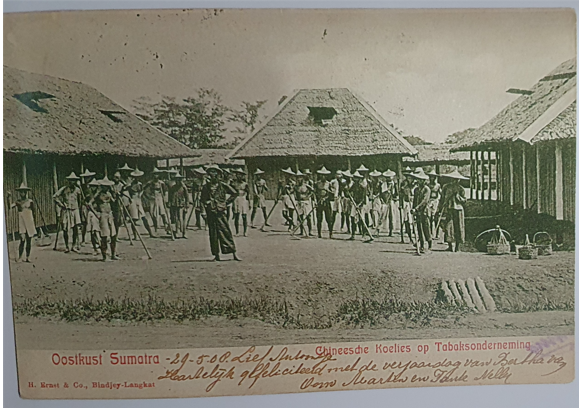 I might conclude with a few of my favourite postcards. One longs to hear the music produced by the “Patience and Perseverance” Brass Band from Kalimantan as shown in Postcard 386: 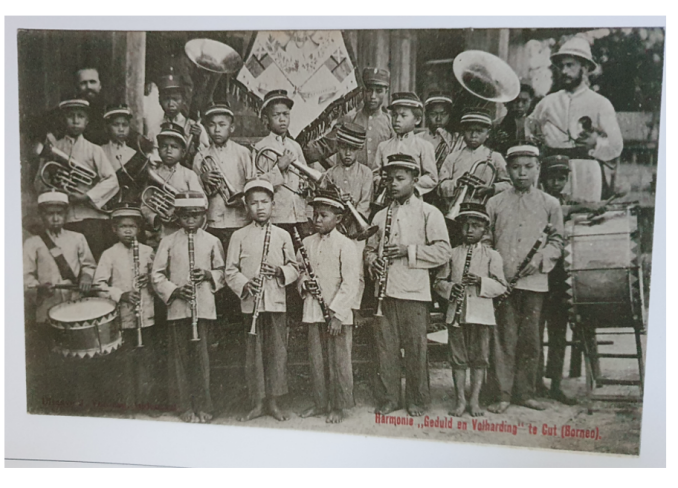 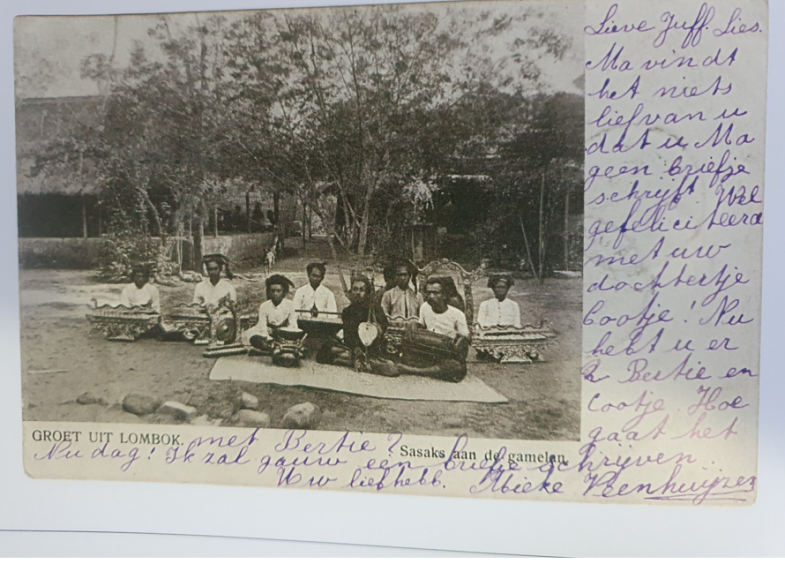 On seeing a postcard like this where the sender has written on the picture side, one has an opportunity to find out what was being communicated. On the postcard, dated 3 August 1907, was written:

Ma (mother) thinks that it isn’t very nice that you haven’t written her a letter.

Congratulations on the birth of your daughter Cootje. Now you have Bertie and Cootje. How is Bertie?

One is left wondering how Bertie is and whether Ma ever got a postcard….

To conclude I can’t resist this delightful postcard (No. 436) of three girls from Flores, which dates from around 1940. 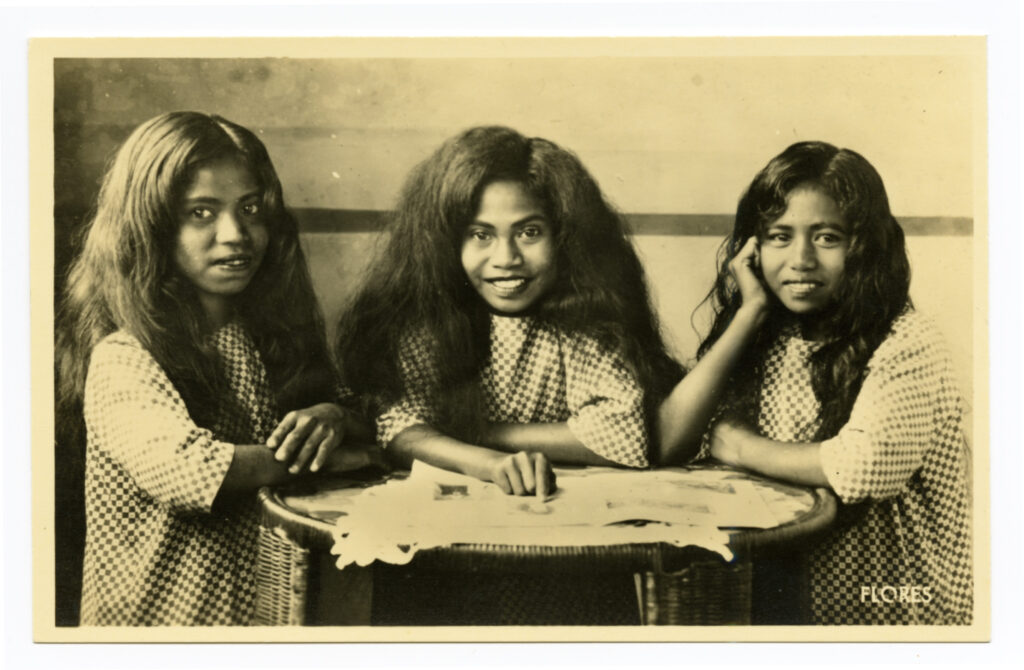 This is a book that will delight anyone who has a connection with Indonesia and is a wonderful contribution to Indonesia’s visual historical records.

Ron Witton gained his BA and MA in Indonesian and Malayan Studies from the University of Sydney and his Ph.D. from Cornell University. He has worked as an academic in Australia and Indonesia and now practises as an Indonesia and Malay translator and interpreter.