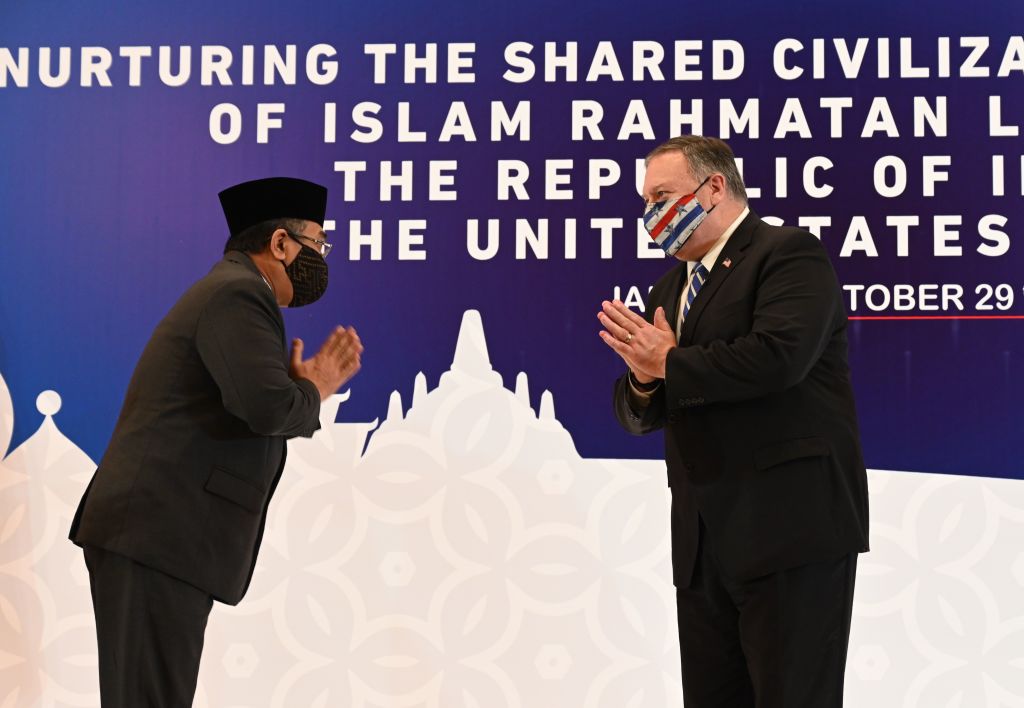 High-level visits to and from Indonesia in recent weeks have highlighted how differently major powers are playing the instruments of diplomacy to Southeast Asia’s largest and most consequential audience. Whether they have charmed or not has been about style as much as substance, a point to which Washington needs to pay more attention.

US Secretary of State Mike Pompeo’s visit to Jakarta last week offers the most striking example. Part of a swing through five Indo-Pacific countries, it followed Indonesian Defence Minister Prabowo Subianto’s visit to Washington earlier in the month, and inter alia reprised the theme of expanded defence cooperation. Pompeo struck the same reassuring chord that Prabowo’s trip did by reaffirming that the United States intends to help Indonesia develop its ‘minimum essential force’ defence capabilities. He also pitched to his hosts by applauding Indonesia’s ‘courageous leadership on the subject [of China’s assertiveness in the South China Sea] within ASEAN and at the United Nations’, and conceding that, ‘It’s a cause worth pursuing in multilateral settings.’

But many Indonesians won’t have listened comfortably to his assertion that both ‘law-abiding nations reject the unlawful claims made by the Chinese Communist Party’. The strident tone would have jarred with those Indonesians fearful that Washington is preparing for conflict with China in the South China Sea and expecting Jakarta to side with it. Indonesian Foreign Minister Retno Marsudi notably avoided any express reference to China in her remarks at the joint press conference, instead characteristically reiterating ASEAN’s Jakarta-crafted formula for preserving peace in the Indo-Pacific through economic cooperation and obedience to laws and norms.

By the same token, Pompeo’s efforts to hit the right note on the theme most dear to President Joko Widodo’s heart—Indonesia’s economic development—were likely a case of hit and miss. Jokowi would have welcomed Pompeo’s promise to encourage more US investment in Indonesia in the digital, infrastructure and energy sectors, as well as his allusion to discussions already underway on how the administration might use the Development Finance Corporation to back private-sector interest in the market. Considering his efforts to push through a suite of microeconomic reforms, he probably appreciated Pompeo’s comments reminding Indonesians that US investors would be evaluating Indonesia’s attractiveness as an investment destination based on the success of those reforms.

Jakarta will also be relieved at the subsequent news that Washington will keep Indonesia in the Generalised System of Preferences (GSP) facility, on which Pompeo was conspicuously silent in his press conference statement. Marsudi made a point of mentioning this irritant in her remarks to the Indonesian public on Pompeo’s meeting with the president. Jokowi, she said, had stressed that Indonesia wanted the US to be a ‘true friend’, but that this partnership shouldn’t be taken ‘for granted’ and should instead be cultivated through serious efforts at mutual understanding and ‘concrete cooperation’, including the continuation of Indonesia’s access to the GSP. Jokowi will therefore chalk this up as a win, though the US decision is reportedly contingent on a quid pro quo and consequently will hang over his head like a Damoclean sword should Donald Trump retain the presidency.

Pompeo’s outreach to Indonesia’s Islamic community, specifically through an address to a Muslim organisation on the birthday of the Prophet Muhammad, is likely to have been the least resonant of his messages. By praising the tolerance of religious diversity, combatting of terrorism and acceptance of democracy with which Indonesian Muslims are generally (and like to be) associated, he tried to play sweetly to his audience. But nothing he said could have doused the resentment his handling of the Israel–Palestinian issue has aroused, a subject to which Marsudi alone referred in their press conference. In this context, her comment that Jokowi had stressed to Pompeo that he wanted the US to understand the interests of Muslim countries was sharp.

Pompeo’s call for Indonesia’s Muslims to condemn China’s treatment of Uyghurs is likely to have fallen even flatter. Ironically, it is has been the more radical minority of Indonesian Muslims that has been the most vociferous on this highly politicised issue. In contrast, the chair of Indonesia’s largest Muslim organisation has gone so far as to label criticism of China’s treatment of Uyghurs as foreign meddling in its domestic affairs, a line essentially echoing that of the Jokowi administration on the subject.

But the way Covid-19 featured during the visit was its most significant element, mainly because it barely did. Marsudi was careful to thank Pompeo for the roughly US$11 million of assistance (including 1,000 respirators) that Washington has provided Indonesia to deal with what the secretary of state reminded everyone had ‘started in Wuhan’. Pompeo also mentioned the US private sector’s efforts to develop a vaccine and therapeutics. But beyond that, his remarks were little more than platitudes.

In this respect, the contrast between Pompeo’s trip and that of Indonesia’s Coordinating Minister for Maritime and Investment Affairs Luhut Pandjaitan to Kunming on 9–10 October for talks with Chinese Foreign Minister Wang Yi was stark. The two leaders discussed cooperation in areas including infrastructure (under the rubric of Beijing’s Belt and Road Initiative), trade and e-commerce, education, and technologies like 5G. But as Luhut’s meetings on the margins with senior representatives of three Chinese firms currently developing vaccines also showed, Covid was the main topic of the visit, in which Indonesia’s health minister and the director of a state-owned pharmaceutical company also participated with a view to procuring a vaccine for a planned mass immunisation program in November.

Considering the practical cooperation the two countries already have underway in this area, Wang’s message that China was ‘willing to work with Indonesia on vaccine research, production and distribution’ of affordable vaccines is likely to appeal far more to the Jokowi administration than Pompeo’s vague remarks. Irrespective of the efficacy of any Chinese vaccine or the veracity and benevolence of Beijing’s promises, in view of these events it is hard to imagine that Washington is conducting ‘vaccine diplomacy’ in Indonesia and Southeast Asia generally anywhere near as effectively as its rival.

This is not to say that Beijing’s Covid charm offensive will alter profoundly Indonesian perceptions of China. Its South China Sea actions and other factors (for example, its preference for Chinese labour over local workers) will continue to play badly with Indonesia’s leadership and public alike. Nor will the Trump administration’s failure to match it cause irreparable damage to US influence. The US retains many attractive qualities to Indonesians, whether as an external strategic balancer; a critical source of investment, high technology and defence assets; a market; or, in its better moments, a culture worthy of emulation.

It is in this last area, however, including with regard to how the Trump administration’s evocation of US culture has defined its Middle East policies and management of the pandemic, that its performance has sometimes echoed so cacophonously in Indonesia that even Beijing’s diplomatic opera risks sounding more melodious. If editorials and comment threads on Indonesian news sites are any guide to wider sentiment, Pompeo’s visit came across like a swansong tour by a band that largely ignored its local fan base and whose lead singer is a repellent proxy for his predecessor. Whoever is secretary of state will do well to start rehearsing something better attuned to the harmonic subtleties of the regional cadence.