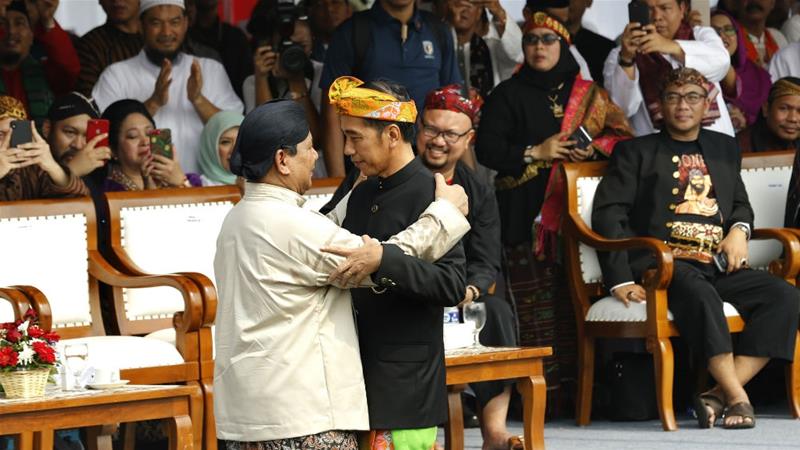 “By Donald Greenless”, University of Melbourne

At the conclusion of an Indonesian election, it might seem strange to contemplate the next, but the 2019 presidential election signposts a significant transition in politics that will be evident by the time the nation votes again in 2024.

The failure of Prabowo Subianto to achieve an unlikely victory over Joko Widodo in the April poll represents another symbolic break with the corrosive politics of the Soeharto-era New Order.

This election will almost certainly be the last in which Indonesians are offered a candidate for the presidency who underwent political tutelage in the ‘echo chamber’ of Soeharto’s authoritarian state.

As Soeharto’s former son-in-law, and one of his most powerful generals in the last days of the New Order, Prabowo is a product of that era. Until Widodo came along, every presidential candidate since Soeharto’s downfall in 1998 was shaped in some way – either as beneficiary or opponent – of the regime.

Now, a new generation of political leadership is steadily emerging by virtue of the broadening and deepening of the political contest since Indonesia’s first post-authoritarian election on 7 June, 1999.

Two decades of democratic politics, which opened the way for new political parties and direct elections from presidency to municipality, has trained and elevated a class of politicians who have served their apprenticeships as provincial governors and mayors.

No doubt there will be others who will pursue well-groomed ambitions, including some with strong Islamic credentials. The chairman of the National Awakening Party (PKB), Abdul Muhaimin Iskandar, trailed his coat to be Widodo’s running mate, presumably in the hope of clearing a pathway to a presidential nomination.

The arrival on the scene of this pool of political talent is welcomed as a source of hope for a younger generation of Indonesians who have a low regard for the old machine politics.

“Despite claims of conservatism (in the electorate), there is an undercurrent of people willing to support leaders who have leadership and technocratic ability,” says Dr Philips Vermonte, executive director of the Centre for Strategic and International Studies in Jakarta. He adds this phenomenon might even reduce some of the traditional political divides.

The generational shift in politics, of which Widodo can count himself as a trailblazer, is bound to bring in fresh ideas and approaches. All of the newcomers came to political maturity during Indonesia’s reformasi years, after the ousting of Soeharto.

Yet, will it foreshadow a fundamental change to the way politics works in Indonesia?

New blood will have to mingle with old habits. Dynastic pretensions are unlikely to vanish.

The presumed ambitions of Puan Maharani, the daughter of Indonesian Democratic Party Struggle (PDIP) founder Megawati Sukarnoputri, are a source of frequent speculation. So too are Megawati’s niece, Puti Guntur Soekarno, a DPR member who impressed as a candidate for deputy governor in East Java, and Agus Harimurti Yudhoyono, the son of the previous president.

A bigger challenge to continued democratisation and hopes for a new slate of candidates, is a political party system that creates an uncomfortably close relationship between powerful business interests and parties, and shields the parties from public scrutiny and democratic practice internally.

The result is parties that are too often the fiefdoms of individuals – often party founders – and their wealthy sponsors.

The electoral system too favours the interests of the big established parties. It limits the size of the field and eliminates independent candidates by requiring presidential candidates to have the support of a party or parties that have either 20 per cent of the seats in the People’s Representative Council (DPR), or have won 25 per cent of the popular vote at the last election.

The constraints the system places on choice are evident from the last two elections. The 2019 election was an uninspiring re-run of 2014 with Widodo and Prabowo once again facing off. In 2014, Widodo had to wait for Megawati’s blessing. She alone controlled his nomination.

There are plans in this five-year term for the administration and the DPR to draft new legislation on elections and political parties.

On electoral reform, there is little expectation among analysts and political reform groups that the parties will agree to lower the bar for presidential candidacy.

One thing that might change is this year’s experiment with simultaneous presidential and legislative elections. The huge exercise in collecting the votes of 193 million eligible constituents for multiple levels of government on a single day took a toll on the system and poll workers.

Another is that the absurd length of the official presidential campaign – it started last September – which might be reduced. A shorter campaign should reduce the misuse of state resources to support incumbents.

Political party reform will be even more sensitive.

Activist groups want to see greater transparency and accountability in party finances and a greater degree of internal democracy. They want the parties to do more to open up their books and be subject to tougher rules governing donations from rich benefactors.

The Ministry of Justice and Human Rights has commissioned a paper by a group of academic lawyers on political party reform which will serve as the basis of a draft law to be discussed with the DPR. A new electoral law will be prepared by the Home Affairs Ministry and the DPR.

A better functioning electoral system and more accountable political parties would be the cornerstone of efforts to revive the incomplete promise of democracy.

It could even encourage a greater degree of pluralism at a time when religious and ethnic divides are starker than ever.

You can read the full version of this article on University of Melbourne’s Asialink.