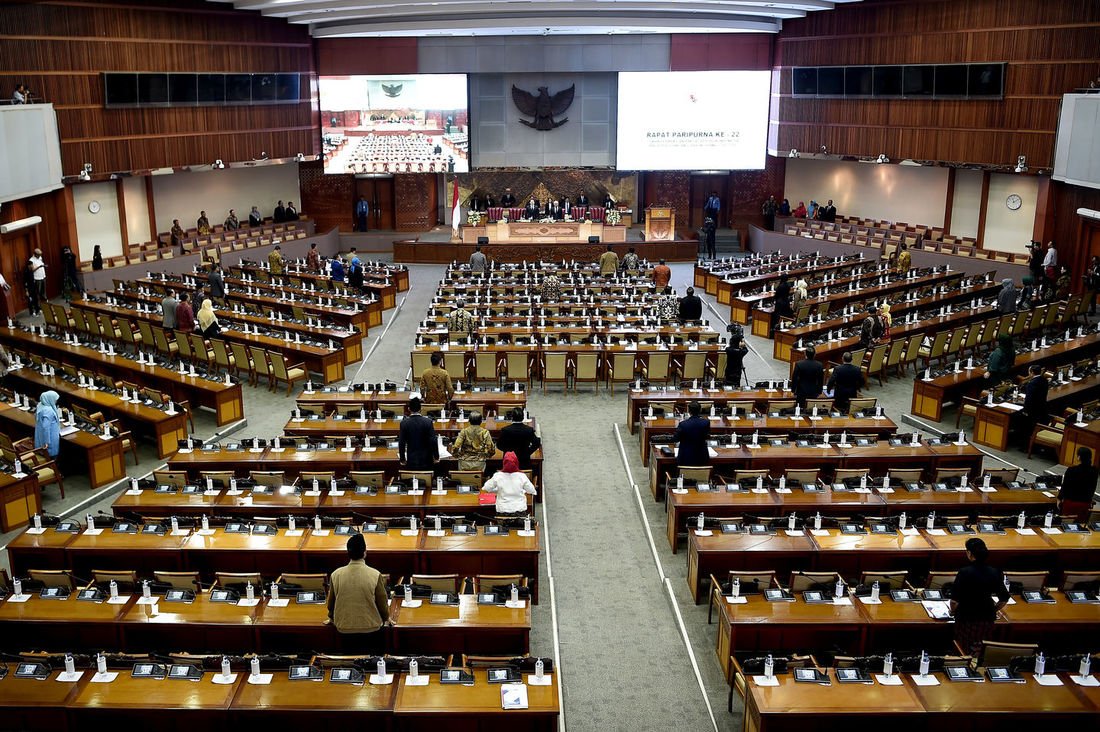 About 80% of the provisions in the so-called “job creation” bill actually regulate investment. Photo by M Risyal Hidayat for Antara.

President Joko “Jokowi” Widodo says he wants to boost economic growth and generate job opportunities. That is why his massive 1028-page so-called “omnibus bill” on job creation (the RUU Cipta Kerja) is now before the DPR, the Indonesian national legislature.

If passed, it would insert 174 new articles in 79 existing laws, and affect around 43,511 central government, ministerial, and regional regulations.

There is no doubt that job creation should be a priority for Indonesia. Covid-19 has devastated the economy, leaving millions jobless. Reform is urgently needed to generate incomes for the unemployed again. But this bill won’t deliver them.

For a start, its title is wrong. Calling it “job creation” is an obvious ploy to win public support, but the bill is not really about job creation at all. About 80% of its provisions regulate investment, rather than creating jobs, and it covers a huge range of areas from business and education to halal certification and regional government powers.

At least five factions in the DPR want the bill’s title changed to “ease of doing business”, because that is what it is really about. Indonesia has long been notorious for a jungle of rules and permits that obstructs business, so these reforms are mainly intended to make life much easier for big business, including foreign investors – and, of course, the oligarchs who back Jokowi’s administration.

Perhaps that explains why ordinary Indonesians have been given so little say about this bill. Law No. 12 of 2011 on Lawmaking requires the government to undertake public consultations on proposed bills before submitting them to the DPR for deliberation. This didn’t happen. In fact, the public only had access to the omnibus bill after submission.

The government says this circumvention of process was because the bill is urgent and should be passed within “a hundred days”. That’s why the DPR is still discussing the bill even though its recess period has begun. Luhut Panjaitan, the powerful coordinating minister for maritime affairs and investment, has even said the bill must be passed in July.

But such a huge and far-reaching statute should not be rushed through. Its implications are as enormous as its size. It needs public debate and very careful scrutiny by lawmakers, not just a rubber stamp.

Because the omnibus bill is basically about making life easier for big business, it would drive a truck through a wide array of important social protections. For example, it would cut deeply into existing worker’s rights, including severance payments and compensation for lay-offs.

It would also seriously dilute important environmental safeguards. Article 23 of Law No. 32 of 2009 on Environmental Protection would be amended so that only businesses that have “a major impact on the environment, society, the economy and culture” will have to pass an environmental impact assessment (Amdal). Unfortunately, the bill does not define “major impact”, leaving it to the government to decide.

The bill would also reduce sanctions for environmental offences and amend Law No. 26 of 2007 on Spatial Planning, allowing the central government to issue a presidential decree to sort out overlapping land and forest use permits. Both these provisions are likely to greatly assist unscrupulous plantation, logging and mining businesses.

But the bill has even bigger problems than these. For example, Article 170 would allow the government to use a government regulation to directly amend the omnibus law once it is passed. Additionally, Article 166 adds that a presidential regulation can be used to cancel regional regulations.

The aim here was obviously to create a quick way for the government to cut through the complicated jungle of laws and regulations that now makes it hard for investors to do business as quickly and easily as they want. But Articles 170 and 166 are fundamentally contrary to the existing legal system – and politically dangerous.

Article 170 directly contradicts the Law on Lawmaking (Law No. 12 of 2011), which makes it clear that a government regulation ranks below a statute (which the omnibus bill would be), and that a lower law cannot amend a higher one. If passed, this bill would allow the government to directly change a statute whenever it wished, taking the power of amendment out of the hands of elected lawmakers. It would allow the government to act unilaterally in way reminiscent of the undemocratic regimes of earlier Indonesian presidents, Soekarno (after 1957) and Soeharto.

Likewise, in 2015 and 2016, the Constitutional Court removed the national government’s right to unilaterally cancel regional regulations, saying it was unconstitutional. Article 166 ignores this decision and purports to return the power to the president. This is a blatant power grab.

The government has been caught on the hop by the furore that erupted over these provisions, suggesting Article 170 was a “typo”. DPR member Achmad Baidowi, secretary of the United Development Party (PPP) faction, accused the government of “amateurism” and being “unprofessional”.  Dini Purowono, a member of the Presidential Special Staff, said, however, that Article 170 was a “misunderstood instruction”, and the public could still lodge feedback on the bill through the website of the coordinating minister for the economy.

But that is clearly not enough. This massive and problematic bill should be shelved, and a proper, measured and transparent process opened to the public instead – just as the law requires. Nadirsyah Hosen is a senior lecturer at the Faculty of Law at Monash University and the chair of the advisory board for the Australia-New Zealand branch of Nahdlatul Ulama. He is an associate of the Centre for Indonesian Law, Islam and Society at the Melbourne Law School. Dr Jeremy J. Kingsley is an anthropologist and a legal scholar of Indonesia working as Senior Lecturer at Swinburne Law School, Melbourne, Australia.

Tim Lindsey is Malcolm Smith Professor of Asian Law and Director of the Centre for Indonesian Law, Islam and Society at the University of Melbourne.