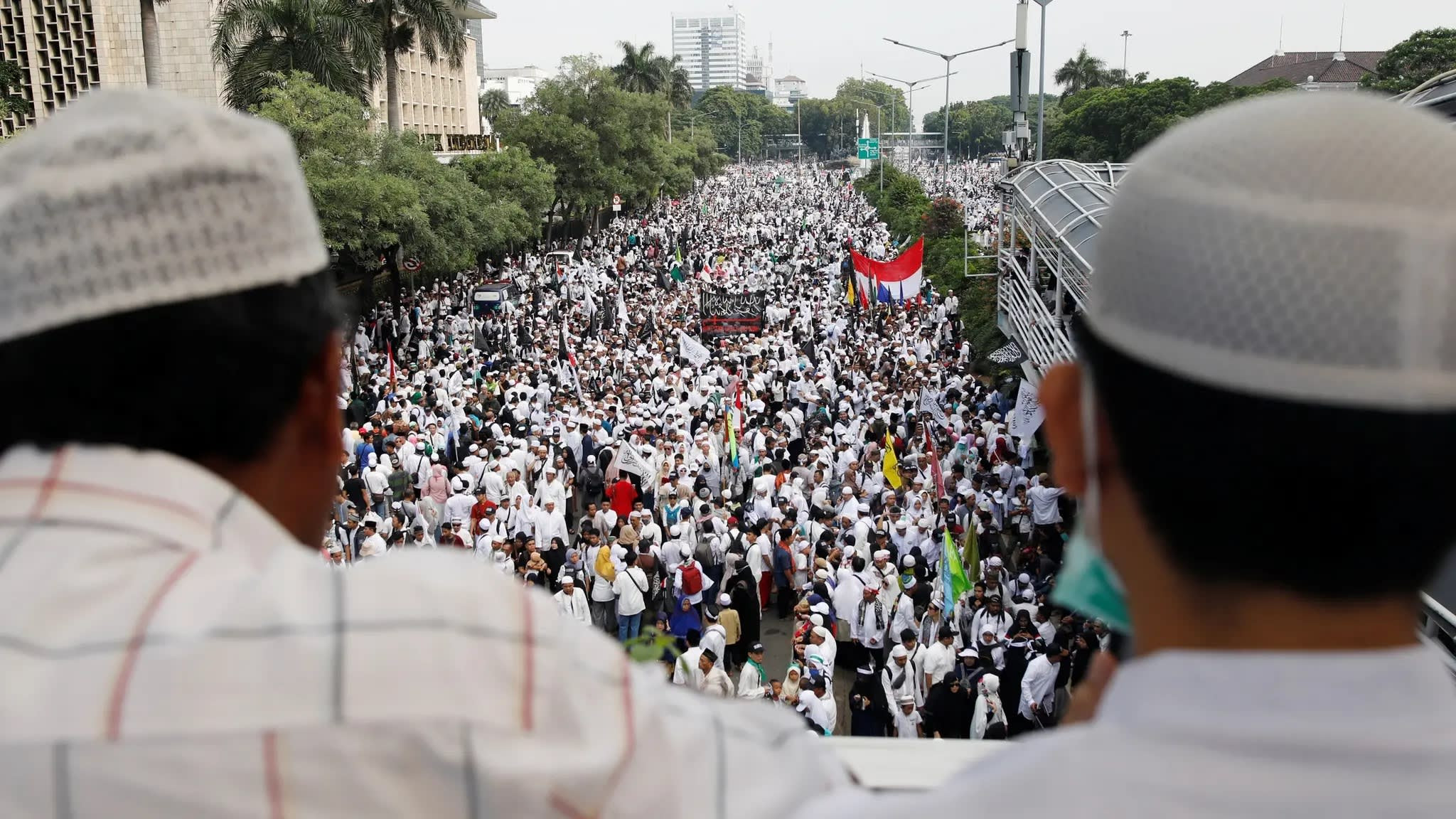 Tens of thousands of Indonesian Muslims commemorate the 2016 protests targeting the city’s former governor, Basuki Tjahaja Purnama, a Christian, in Jakarta on Dec. 2.   © ReutersJAKARTA — Religious intolerance is on the rise in Indonesia as conservative Muslims regain political clout ahead of general elections scheduled for April, a sign that the country is re-examining its Islamic foundations.

Singaporean online retailer Shopee’s huge marketing campaign to break into the Indonesian market is backfiring, as its television commercial featuring the popular South Korean girl group Blackpink was slapped with a ban from a local watchdog due to “indecent” content.

The Indonesia Broadcasting Commission said on Dec. 11 it issued “strong warnings” to 11 local TV stations to stop airing the commercial, in which four members of Blackpink don miniskirts and short dresses. The ad was supposed to coincide with National Online Shopping Day on Dec. 12.

“The commercial features several scantily clad women singing and dancing,” the commission said in a statement. “The Shopee commercial potentially breaches decency norms that the general Indonesian public adhere to.”

The commission had acted swiftly in response to an online petition filed against the ad, which was signed by more than 120,000 people just a week after it was posted in early December. Shopee has bowed to the pressure and replaced the ad. 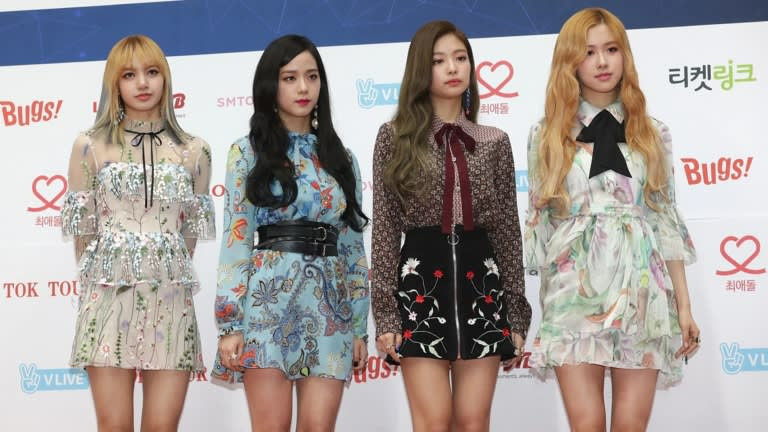 Members of the South Korean group Blackpink, whose recent commercial was banned in Indonesia for breaching “decency norms.”   © Getty Images

The controversy is the latest instance of conservatives’ growing influence in Indonesia, a secular nation home to the world’s largest Muslim population. Largely oppressed during three decades of the authoritarian New Order regime, Indonesia’s small conservative communities have been able to express themselves more freely following the regime’s collapse in 1998. But while their teachings had been largely confined to mosques and small community gatherings, in recent years they have spread via social media to the relatively moderate Muslim majority, allowing outspoken conservatives to often dominate public discourse.

Conservatives nearly succeeded in forcing the Constitutional Court and the House of Representatives to prohibit gay and extramarital sex. They have also started an anti-vaccine movement based of claims that certain medicines contain pork-based ingredients, causing problems for the health ministry’s vaccination programs. Their influence is now such that many public institutions are drawing up policies to more actively promote Islam, the latest being the Jakarta prosecutors’ office’s controversial launch of a smartphone app — dubbed the “heresy app” — allowing people to report deviant religious activities.

Unlike radical extremists such as Islamic State, Indonesian’s conservative Muslims have long denounced terrorism. But their sermons have become increasingly strident, laced with fearmongering and disinformation to portray Indonesia as being under siege by anti-Islam conspiracies. This growing intolerance is fueling sectarian tensions in the world’s third-largest democracy.“I used to be a fan of this preacher,” a civil servant in Jakarta said, referring to a Muslim cleric in his neighborhood. “But he now often delivers inflammatory sermons, saying that the Shiite blood is halal. It’s very uncomfortable.” Shiites, a major branch of Islam, are a minority in predominantly Sunni Indonesia. Like other minorities, they have been the subject of verbal attacks.

Indonesia’s conservative movement is far from homogeneous, noted Bastiaan Scherpen, a Netherlands-based expert on politics and Islam in Indonesia. Groups range from the vigilante-like Islamic Defenders Front, or FPI, and the radical Hizbut Tahrir Indonesia, which was banned last year due to its stated goal of establishing an Islamic caliphate, to the more moderate Prosperous Justice Party, which has members in parliament. 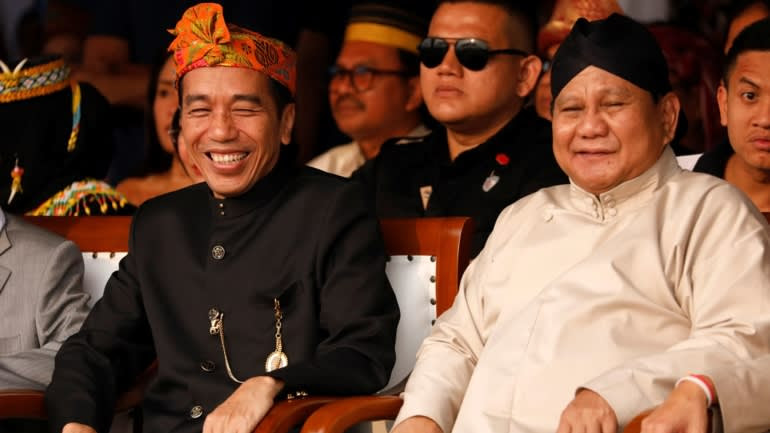 The groups disagree over many matters. But during the hotly contested and publicly divisive 2014 presidential election, they began to coalesce around the opposition camp led by former Army general Prabowo Subianto, who lost to President Joko Widodo in 2014 and is set to face off against him again in April.

Their alliance emerged when the groups jointly organized huge rallies in late 2016 against then-Jakarta Governor Basuki Tjahaja “Ahok” Purnama, a Chinese Christian ally of Widodo. The groups accused the popular governor of blasphemy, leading to his downfall and later incarceration. The opposition-backed candidate, former education minister Anies Baswedan, went on to win the governor’s race.

Similar campaigns spread via social media and in speeches warned of an invasion of Chinese workers and the revival of the disbanded Indonesia Communist Party, while the Widodo administration was accused of intimidating the country’s ulemas, or Islamic scholars, in a bid to undermine the president’s Muslim credentials.

The alliance held a large gathering, tagged as “reunion,” at the National Monument in Jakarta on Dec. 2. Although held under the pretext of Islamic solidarity, the event was attended by opposition leaders, including Subianto. Although he did not deliver a political speech there, claiming the event was not election campaigning, which is not allowed until March, organizers played a speech record by a self-exiled FPI leader in Saudi Arabia, who repeatedly asserted that “It is forbidden to vote for presidential and legislative candidates backed by parties who support religious blasphemers.”

Apart from Ahok, the statement is also likely in reference to Grace Natalie, the Chinese Christian leader of the newly founded Indonesian Solidarity Party. Natalie, who has expressed her support for Widodo, was reported to police last month over a blasphemy allegation after she declared opposition to Sharia- and Bible-inspired bylaws. 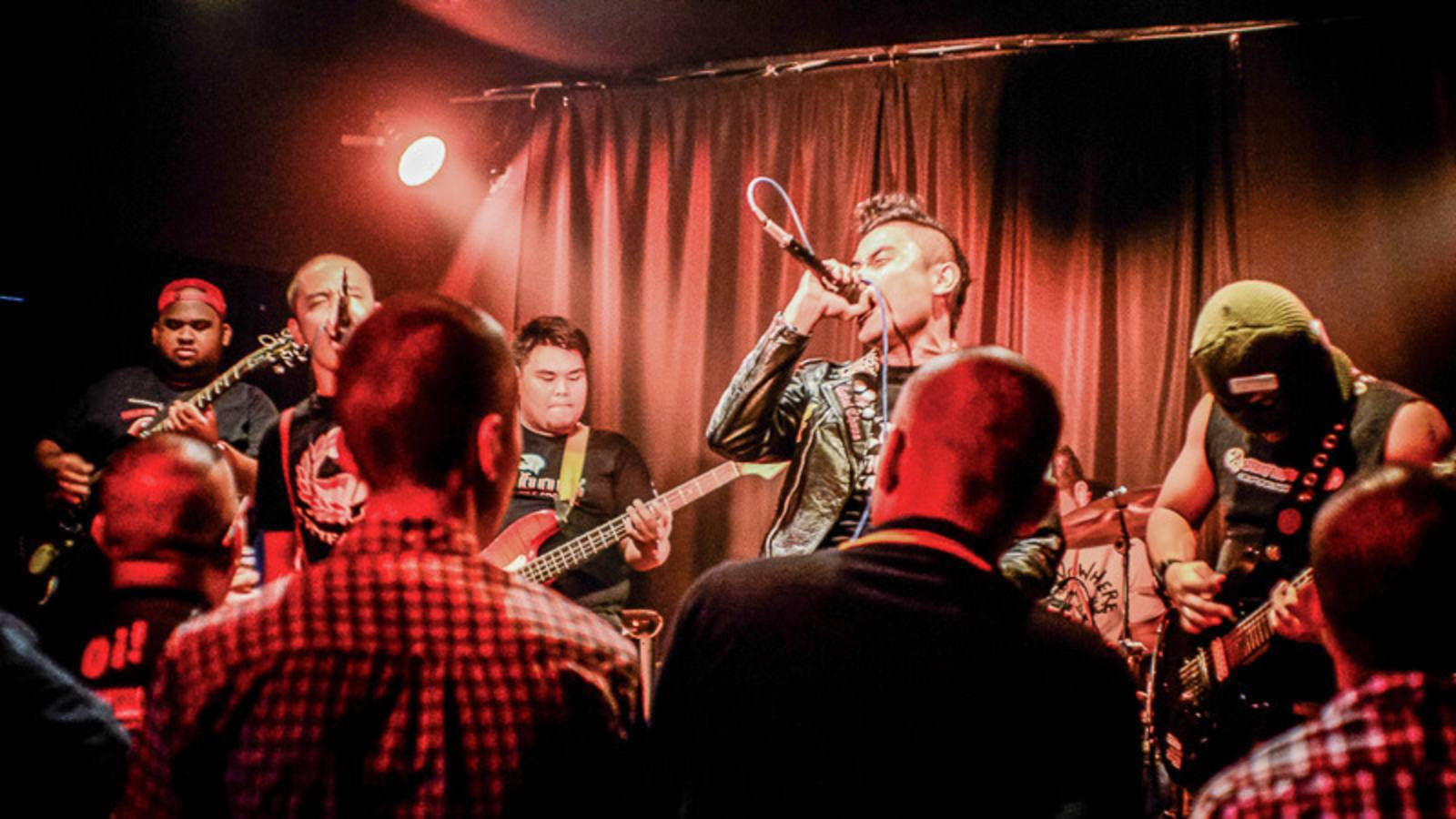 Indonesia’s Widodo has edge in bid for second presidential term

“We don’t know what kind of arrangements are being made behind closed doors, but the challengers clearly know how to use conservative Islamic sentiment to their advantage,” Scherpen told the Nikkei Asian Review.

He does not believe, though, that Subianto and his running mate Sandiaga Uno, a businessman and former deputy governor of Jakarta, are genuinely inclined to Islamic conservatism. They are largely seen as seculars by people who have long known them.

Scherpen pointed out how Baswedan-Uno used the same religious arguments to defeat Ahok in the 2017 Jakarta election. “This initially caused shock waves, but since then there has been more continuity than change in the way the city is being governed.”

He added that a victory for Subianto in April will likely be presented and perceived by many as a victory for conservative Islam. “But while a different tone would be set in the presidential palace, I wouldn’t expect significant change in policies related to religion or rights.”

Widodo’s choice of senior cleric Ma’ruf Amin, chairman of the Indonesian Ulema Council which issued a religious edict against Ahok, has largely helped the president fend off attempts to remove him from office the same way Ahok was chased out, observers have noted. But his choice of the cleric will hardly change the thinking of conservative-leaning Muslim voters, who have already been barraged with allegations of the president’s anti-Islamic views.

Along with simmering religious tensions is an uneasy economy, which is worrying the public. Some polls suggest that the 49-year-old Uno is giving Subianto a boost, owing to his frequent meetings with supporters to discuss the rupiah’s depreciation, income gap and unemployment. Meanwhile, the 75-year-old Amin does not seem to be helping Widodo on the economic front. Recent polls suggest that while Widodo still maintains a comfortable lead over Subianto — polling at around 50% versus 30% — the gap is narrowing.