Three years on, Australian and Indonesian consumers and businesses might wish their officials had paid more attention to their own parochial misunderstandings and foibles. Although the two nations finally signed IA-CEPA in early March, the agreement’s long, winding road laid bare the fevered and often bizarre political mishaps that frequently derail the relationship between the two very different neighbours.

The IA-CEPA was initiated in 2007, but like much of the bilateral relationship, went on ice in 2013 after the publication of alleged Australian espionage against Indonesian leaders. Negotiations were reactivated in 2016, once both countries brought in new businessmen-turned-political-leaders – Indonesia’s President Joko “Jokowi” Widodo and Australia’s then Prime Minister Malcolm Turnbull.

Despite palpable warmth between the leaders, negotiations in 2017 and 2018 were torpid(link is external) – at times a prisoner to Australian politicians’ spruiking unrealistic (and subsequently unattained) targets for IA-CEPA’s delivery.

Even after the extension of talks into 2018, it seemed a hard ask. For Indonesia, a difficult and domestically unpopular trade agreement with a wealthier neighbour seeking to boost its food and services exports seemed an unlikely priority, especially with elections approaching.

Four years into Jokowi’s term there was clearly less appetite for ambitious, macro-level changes. Indonesian economic diplomacy had become narrow, and at times combative. It focused on the promotion of Indonesian products; pushback in the World Trade Organisation (WTO) (both countries brought WTO actions against one another during negotiations); and aggression on domestically popular issues like fighting off international environmental concerns about Indonesia’s palm oil industry. 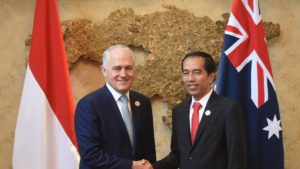 As many will know, however, it was unforeseeable political chaos in Australia that proved the biggest threat to IA-CEPA.

It came during the by-election in the federal seat of Wentworth in October last year after the resignation of Turnbull. With the IA-CEPA text finalised and simply waiting for the leaders’ signatures, new Prime Minister Scott Morrison – desperate to retain Wentworth and therefore the Coalition’s parliamentary majority – decided to canvass a “review without prejudice” of the location of Australia’s embassy in Israel.

The announcement prompted the reaction Indonesia watchers would have expected. Indonesia’s Foreign Ministry – by coincidence holding its Palestinian Solidarity Week and hosting a bilateral visit with their Palestinian counterpart that very day – seized on the issue(link is external) as a “slap in the face” given Indonesia’s longstanding Palestinian support.

The Singapore leaders’ meeting that was supposed to serve as the venue for signatures came and went with Indonesia indicating that IA-CEPA would wait on the Australian review. Thankfully for IA-CEPA, the upset wasn’t fatal(link is external) given Jokowi’s continued desire to push trade liberalisation and portray Indonesia as “open for business”.

But the incident shows how in Indonesian politics, especially for ministers looking to raise their profile and burnish their toughness, there is little downside to sticking the boot into Australia – especially when a polarising domestic issue arises.

To the parties’ credit, IA-CEPA still got done. Praise should go to both governments, which committed to the deal not only as an economic boost through tariff reduction but also as a platform for future growth in the bilateral relationship. IA-CEPA’s emphasis of economic cooperation and a standing mechanism for ongoing work on non-tariff measures will hopefully create durable “architecture” in the same way that more longstanding security activities and meetings have built cooperation, trust and networks among officials.

Jokowi deserves praise too. Although economically nationalist and with a tendency to seek out simple or hasty solutions rather than more structural ones, he has lent his imprimatur to trade liberalisation in a way unusual for an Indonesian politician. It was his downward pressure on officials that imparted purpose to a negotiating process that could have simply drifted after the late-2017 completion deadline was missed.

It is this odd relationship’s peculiar and often maddening dynamics that best illustrate IA-CEPA’s importance. If successful, its forums for institutionalised and expanded economic, trade and investment cooperation will be particularly welcome when the political winds inevitably next shift.

Although signed and now awaiting ratification(link is external), there is still political coda(link is external), with Sandiaga Uno, the running mate of Jokowi’s opponent Prabowo Subianto, telling an Australian journalist that they want to open up the agreement for what he regards as improvements, including the removal of quotas on live cattle exports. After the abolition of quotas in 2016 in favour of a cumbersome mandatory ratio of breeder to feeder imports, the extension of automatic annual quotas for Australian animals(link is external) has been presented as one of the key wins of IA-CEPA.

In one sense, this is right, as quotas are not generally seen as best practice. On the other hand, if this new quota links to the automatic and bankable provision of permits for Australian cattle imports it will prove a welcome improvement. Even when quotas existed previously, they functioned more as an administrative aspiration than a commitment to a level of realised imports. Ultimately, the fact that this critique is, curiously, coming from the presidential ticket with the far more protectionist and economically nationalist narrative is yet another piece of the rich bilateral tapestry.

This article was co-published with the University of Melbourne’e Election Watch blog.