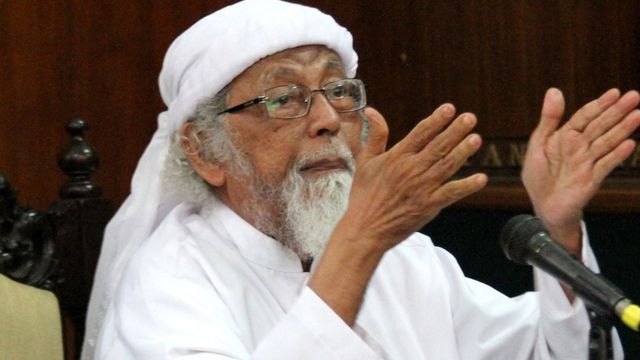 Last Friday the alleged mastermind of the 2002 Bali bombings, Abu Bakar Bashir, walked-free from his prison cell in Bogor, located close to Jakarta.

His early release for ‘good behaviour and due to his age’ has understandably caused outrage and disbelief from many of the families whose lives were torn apart as 202 people – including 88 Australians – died in the explosions that ripped apart the Sri Club and Paddy’s Bar in Bali’s Kuta Beach. Another 202 people were injured.

The distress and anger of Bashir gaining his freedom is also shared by many Indonesians families, who lost 38 loved-ones in the same bombings.

Bashir had served two-thirds of a 15-year sentence for supporting militant training groups in Sumatra, but he has always denied any direct involvement in the Bali bombings, despite his role as the spiritual leader of Jemaah Islamiyah who carried-out the atrocities. Evidence suggests Bashir indeed did not have any direct role, however as Sidney Jones, director of the Jakarta-based Policy Analysis of Conflict remarked last week, “Bashir was in a position, when the bombers came to him to ask for his endorsement of their plans, to say ‘no’, but he didn’t.” As Bashir starts what remains of his life as a free man, experts seem to agree that his influence within Indonesia’s diminished terrorist movement will be minimal, and authorities will also monitor his actions closely.

The anger surrounding his early release may also damage further the perceptions in Australia of Indonesia where already around 60% of Australians hold some level of distrust of Indonesian people, despite the vast Muslim-majority of their 275 million population holding values and hopes similar to that of Australians. Indonesia is also home to 28 million Christians; more than double than here in Australia.

Any setback in how Australians perceive our neighbours to our north will also work against our own Interests. As China increases its presence in the South China Sea, and continues a bitter trade war with Australia, and with the USA facing unstable times, Indonesia is even more vital to Australia as a friend and ally who can work together to ensure security, stability and growth in our region. Both countries have also signed a major trade agreement recently, opening-up enormous opportunities in business partnerships, investment and exports. But in order to build close relations we also need mutual trust.

Already Australia enjoys close working relations with the Indonesian defence force, intelligence agencies and policing where with the support of the Australian Federal Police, Indonesia’s National Police have destroyed the larger terrorist cells in their country, making Australia and holiday spots such as Bali far safer.

President Joko ‘Jokowi’ Widodo has always taken a hard-line on militant groups, recently arresting the young firebrand Muhammad Rizieq Shihab, the leader of the Islamic Defenders Front, charging him with incitement of criminal acts and holding large gatherings despite restrictions due to the Covid-19 pandemic that is impacting Indonesia badly.

Whilst most Australians, and Indonesians feel deeply that Bashir should remain in jail for life, it is important to know that Australia and Indonesian authorities have worked very hard to make our region safer from terrorism, and whilst Bashir is now free to promote ‘jihad’, this 82 year-old man now ‘enjoys’ far less admiration from militants than in previous years, and almost no respect or support from the vast majority of Indonesia people.

Ross B Taylor is the president of the Perth-based Indonesia Institute Inc.