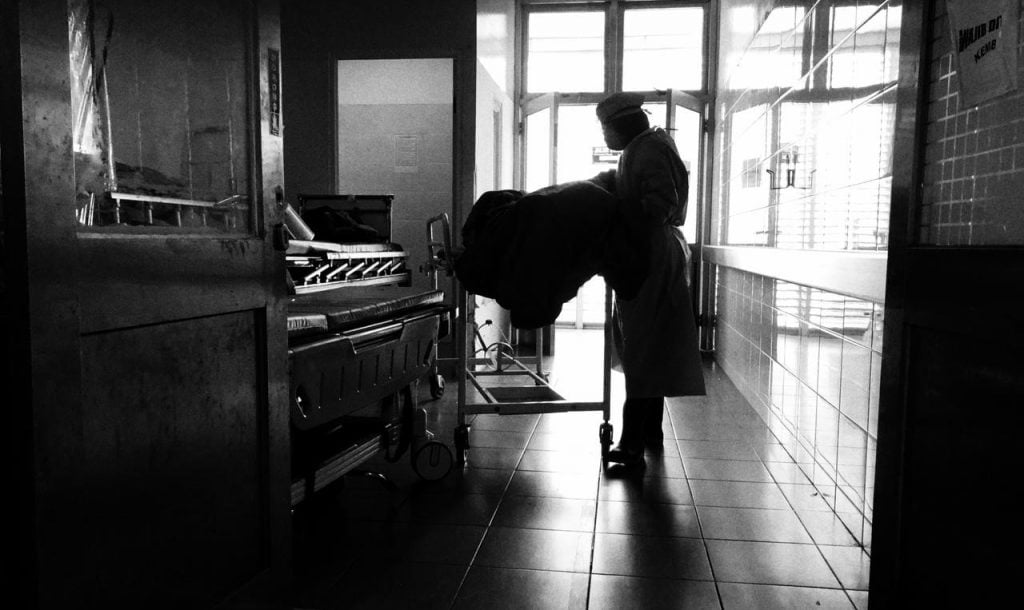 A couple of days ago he fell sick. We found him sitting at our porch in the house we share in Central Jakarta. His body was limp, he couldn’t speak, and he was only half-conscious. We thought he’d had a stroke. He was somewhat diabetic, so I immediately went to the pharmacy to buy a device to measure his blood sugar. It was quite high.

I took him to the hospital. At the hospital’s ER, we were rejected as his oxygen saturation was low—a COVID-19 potential. I brought him to a COVID-19 referral hospital, knowing that they’re all full. We were again rejected because he hasn’t been confirmed positive, so we decided to bring him home again.

A friend lent us a small oxygen cylinder. The next day, we paid a private lab for an antigen swab at home. Positive. His 25-year old son was also positive. My wife and I were negative.

That night I wandered around looking for an ambulance. None were available. At the subdistrict health centre, I was overjoyed with hope when I saw three ambulances parked at the front. That hope was crushed. When I came into the office, I was greeted by their only staff. All others had COVID-19. The next health centre was also helpless. They were paralysed. Overwhelmed.

When these rejections happened, all I could do was to silently go away. The healthcare workers were also out of words. I could only imagine what they felt. We all understood. It’s not that they didn’t care. They’ve been exhausted, and had to accept defeat.

I also wandered around that night looking for oxygen refill, with the cylinder on top of my motorcycle. I was lucky. When I got to a shop, their supply had just been replenished. I queued up behind a man who said he’d been to twenty other places. He was looking for a refill for his kid. His oxygen tube was as small as mine. It broke my heart.

We also called many hospitals. All rejected, or simply didn’t respond. But walking-in was too risky.

In the morning, though, I decided we had to brave a walk-in. My wife, Ade, stayed at home with our two little kids. Two waste management workers helped me and my nephew lift my brother-in-law into the car we borrowed. At the hospital, another rejection. They were full. They suggested another hospital. I sped up there—it was a ten-minute trip.

By the time we got there, my brother-in-law was gone.

Because he was positive for covid, I signed an approval for the handling of the deceased according to the Covid protocol.

I went back home to get my brother-in-law’s clothes. They prepared his body at the hospital for the funeral.

We waited for the government’s ambulance. But it took too long. We decided to rent the hospital’s ambulance.

Along the way, we passed by and travelled with several other ambulances. Rorotan, the burial ground that was only opened a few months ago, was surreal. It was swarming with excavators! They were everywhere, all hard at work digging holes. The soil was red. It was raw soil. Not at all like solemn cemeteries. All ad hoc, extemporary. Workers in white hazmat suits prepared the soil, lifted crates, packed the soil in the hot sun. Some locals were fishing at a nearby pond. A man industriously put together crosses from wooden boards, painted them white, wrote names with a felt marker. Ambulances kept going in and out. Our crate went into the hole, and an excavator immediately filled the hole up with soil. Not long after, the next hole, and the one next to it, were also filled. This was just the Christian section. Christians are not the majority. We passed by other sections that were more hectic.

We were there for only forty minutes. But in that short time, there were countless ambulances. When we drove back home we ran into ambulances again. [Translated from Indonesian by Tintin Wulia]